Could this be the most beautiful satellite ever made? In fact it is one of twins, as there are two of these jewelled spheres in Earth orbit. They're the LAGEOS satellites, essentially inert reflectors to bounce lasers off. The jewels are fused silica, except for four made from germanium. The interior is not a void filled with instruments: it's a solid brass cylindrical core, covered in a thick aluminium shell, as you can see in the video below.

(Hang on, you say. Fused silica? Isn't that just glass? Well yes and no. It's amorphous silica, but without any of the other ingredients that make up the glass we use, like lime, soda and potash).

LAGEOS stands for  LAser GEOdynamic Satellite. The first was launched by the US on May 4 1976, and the second, made by the Italian Space Agency, was launched in 1992.  This means in 2017 the 60 cm sphere - harking back to the spherical satellites of the early space age, such as Sputnik, Vanguard and Echo, achieved 41 years in orbit. It's a veteran of space science.

And because they're completely passive, with no power, fuel, solar panels or instruments, their missions are not ending any time soon. They should be up there for about 8.4 million years according to the original prediction! They can just keep going until their reflectors are too weathered by exposure to the space environment to bounce a laser back to Earth. The glass eyes are meant to be dust and radiation-resistant, but, just like the famous space shuttle windows, they could be damaged by hypervelocity particle impact. Perhaps the quality of the return signal could even be a way of measuring deterioration in the surfaces since launch, and hence gauging something about taphonomy in space. I wonder if this is possible?

The two satellites orbit at around 6000 km in a circular polar orbit. The information they have provided has contributed to new perspectives of the Earth, as former LAGEOS project scientist David E. Smith explains:

Today, we see Earth as one system, with the planet’s shape, rotation, atmosphere, gravitational field and the motions of the continents all connected. We take it for granted now, but LAGEOS helped us arrive at that view.

Even more importantly, the two LAGEOS define the centre point, based on the Earth's centre of mass, for the terrestrial reference system used in navigation. 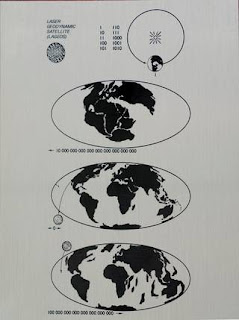 One of the things they're used for is to measure the speed and direction of tectonic plate movement. Because of this, LAGEOS-1 was the recipient of one of Carl Sagan's time-travel interspecies communications.  He conceived a design - drawn by Jon Lomberg who also worked with him on the Voyager Golden Records - engraved on a thin steel plate that was wrapped around the brass cylinder core - depicting continental drift at three points in time: 268 million years ago, 1976, and in 8.4 million years. You'd have to crack the satellite open like an egg, though, to get at the message. It's precisely the sort of alien mystery object that science fiction writers imagine falling to a planet and catalysing personal and social revelations, even when the object is impenetrable. Who knows who or what might find it in 8.4 million years? Will it melt in re-entry, fall into the ocean unnoticed and unmourned, or slam into the Australian outback like Skylab, to lie under the stars for another few million years?

There's another little mystery too. LAGEOS 1 has the most precisely know orbit of any orbital object. In 1978, LAGEOS-1 began descending at a much greater rate than it should have. In 1983, as David E. Smith described in a Nature paper, the satellite rather unexpectedly began to ascend again. It's still losing altitude - 1.33 mm each day - but because it is mostly beyond the reach of the atmosphere which drags objects in lower orbits back in, the cause of the decay is still a matter of debate.

And here's another interesting fact. The Optus B series of GEO telecommunications satellites have laser retroreflectors mounted on them too. My colleague Owen Mace (one of the pioneering Australis Oscar V team) had the contract to make them. Optus B1 is in the GEO graveyard orbit; Optus B2 exploded on launch, and Optus B3 was replaced by Optus D1. This means it is still in GEO but technically classified as space junk. Is anyone ranging to the two reflectors? I don't know....


References
Dey, Uijal, Kar, Samanwita, and Amitabha Ghosh 2016 Possible effect of the Earth's intertial induction on the orbital decay of LAGEOS. Journal of Astrophysics and Astronomy 37(3):1-9


Note: after I began writing this blog post, it morphed into an article for The Conversation.