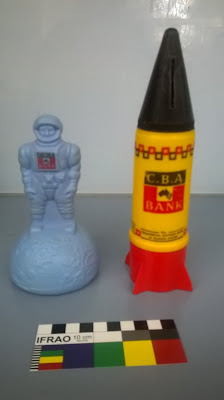 This charming photo of vintage Commercial Bank of Australia moneyboxes was sent to me by Stephen Muller. It's a little blurry but I still think they're awesome.

Shadows on the Moon have many scientific implications, from temperature to the electrostatic properties of lunar dust. I'm more interested in the cultural and social aspects of lunar shadows, however, while noting that the lines are often blurred between these distinctions.

I've considered shadows as part of the fabric of the Apollo landing sites. In another post I looked at Apollo mission photographs in which the photographer is present only as a shadow. Here, I'm thinking about shadows cast by 'natural' features; light, perspective, and movement.

This is a series of images taken by the Apollo 8 mission in 1968. (All these images are from the NASA archives). Apollo 8 was the first US human spaceflight mission to orbit the Moon. People usually remember this mission for the famous snap of Earthrise, claimed to be one of the most influential images of all time.

Over 20 hours, the Apollo 8 spacecraft with its three crew orbited the Moon 10 times. The aim was to map the lunar surface, supplementing data from the Lunar Orbiter in 1964.

This wasn't all, though. The crew were scoping out possible future landing sites, and shadows were a factor. A little way into their sixth orbit, one of the astronauts says:

The sun angles that we see now from the first IP, second IP, and P 1 are just right, I think, for landing conditions. The shadows aren't too deep for you to get confused, but the land is - has texture to it, and there are enough shadows to make everything stand out.

Not too much shadow, but not too little either. So now let's look at the shadows as seen by Apollo 8.

I've chosen these images from different points in the magazine 17C roll to show how shadows change as the spacecraft flew over the surface from lunar day to lunar night.

The surface of the Moon is a bright mirror against the black of space (Figure 1).


With a different camera angle, the brightness fills the entire screen. We can see even brighter white markings (Figure 2). If you didn't know this was the moon, it could almost be the surface of a stone tool under a Scanning Electron Microscope, the changes in colour representing incipient fractures too small for the naked eye to detect.

As the Apollo 8 spacecraft injected itself into lunar orbit and prepared to take the first photographs, the astronauts commented on the lack of shadows.


The details start to be resolved. It's no longer a flat surface with markings or fissures; it's a raised surface where faint shadows give it depth and texture (Figure 3).

Here, we're moving away from the subsolar point where the sun is overhead. The angle of light does not produce shadows, much as on Earth.


Now we see more detail, and gradations of shadows, as the Apollo craft heads towards the terminator. The craters look like footprints in deep sand interspersed with those of smaller animals and worms, such as you might see on the surface of a beach still wet from the retreating water of the tide. In fact, astronaut Jim Lovell compared the texture of the surface to greyish beach sand.

In each major depression there are two or three shades of shadow, with the deepest black on the left hand edge.

The shadows are deeper and darker as Apollo 8 approaches the evening side of the Moon. They convey a sense of late afternoon with an oblique sun. At the base of the craters, the shadows are deep black and even a little sinister (Figure 5). There are surfaces on the Moon that are permanently shadowed, never exposed to sunlight.

The proportion of light and dark is now starting to reverse. The shadows are taking over the craters, leaving a miniature new moon sliver of brightness on the right side (Figure 6). These are deep holes, perhaps the lair of a lunar worm waiting to propel itself towards the spacecraft with a snap and swallow it whole.


It is night on the Moon and all lies in shadow. Only the rim of the craters catch residual sunlight - or is it Earthlight?

In the debrief following their return Anders commented that 'night landing or landing on the moon in an earthshine condition would be acceptable from a visibility standpoint'.

Anders raised another interesting point in the official debrief:


I thought that the shadows were not nearly as black as there [sic] appeared to be in the simulations that I've seen on earth, particularly the Boeing simulation. We could even see the features that were on the shadowside of some rills and rims. So, although it's dark, it's not a complete black and white situation.

Naturally I'm taken with the concept of the shadow simulation. These would have used images from the Lunar Orbiter, which was orbiting at a higher altitude.

So what's my point? These are so different to the shadows cast by the accoutrements of robotic and human landing missions on the Moon. All the ones I've shown here have a circular geometry, and they're mostly about 'bumps and holes', as one of the astronauts said (from the transcripts it's sometimes hard to tell who said what). There's a peculiar feature of these bumps and holes which is shared with microscope views: sometimes it's hard to tell which one it is. Depressions and hollows can look like hills and protruberances, and you have to 'get your eye in' to see them properly. It's a sort of optical illusion, I guess, but one in which the shadows are critical.

Most of the cultural shadows on the Moon are cast by objects resting on the surface rather than depressions into the surface (although there are some of those too). They're frequently angular or linear. More recently, the Lunar Reconnaissance Orbiter has used these shadows to identify features of the Apollo sites.

Shadows are a critical feature of the visual experience of the Moon, at least for the astronaut. I'm not sure whether we can see lunar shadows from the Earth with the naked eye, though. Light and dark areas are caused by the reflectance properties of different geologies (selenologies?), known as albedo features. I don't think we can see the movement of shadows as the light of the sun or the phases of the moon change. With a telescope, though, it's different. The elongation of shadows near the terminator can be seen and photographed.

There's something about scale and distance here, and about technology and vision. I guess what I really want to say is that shadows aren't incidental to our experience of the Moon. They're signs that we can read, and translate into science, and into poetry too. 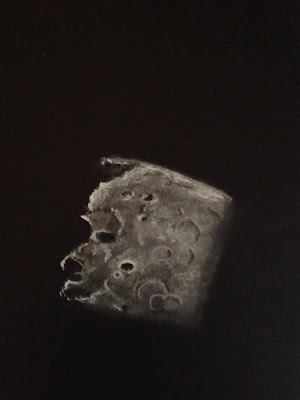 
A patch of the Moon
flanked by shadows: trembling sense
we shouldn’t be here.

Image and poem by @tychogirl