Shades of Skylab: the re-entry of the UARS satellite, and the psychological effects of orbital debris

This Friday, debris from NASA's Upper Atmosphere Research Satellite (UARS) is predicted to re-enter the Earth's atmosphere. Twenty six components are expected to survive, with a 1-in-3200 chance of hitting someone or something. Where it will re-enter is not precisely known.


When Skylab was about to re-enter, there was a great deal of speculation and fear across the world. In the early days, NASA did not give much thought to managing public expectations, only establishing an information centre towards the end. Some thought that it was best not to give the public the impression that NASA was in control (only partially true) as it would reduce the blame if anything went wrong! People thought the world might blow up, or that the spacecraft would descend upon them in vengeance for their misdemeanours (see also my previous post here). Psychologist Talma Kushnir investigated how people in Israel perceived the risk.  This is how she summed up the situation:

The anticipation of the fall of Skylab was a worldwide event. Several features of that situation might have caused confusion and emotional arousal in at least part of the population. For example, catastrophes usually occur without prior notice, but in this case the whole world was alerted for weeks beforehand. While the fall was inevitable, its exact timing, location and consequences were unpredictable. For many people it represented a risk of unknown magnitude. The public was constantly bombarded by the mass media with bulletins of confusing information. Moreover, the information provided at the time was mainly probabilistic and varied from moment to moment, within and between available sources. On the whole, many individuals might have perceived the situation as stressful. (Kushnir 1982:85)

Among her conclusions were that
1. The media played a role in exaggerating the risks; and presented statistics about the risk that were not very accessible;
2. Stress was higher among women, youth and uneducated people - the less education the person had, the more unrealistic their expectations;
3. Fear of science and technology may have contributed to higher levels of stress.

The gendered dimension is interesting here. Kushnir noted that:


in almost any sample, females are more likely to have less years of formal education and less knowledge of scientific and technological matters. These reasons may contribute to their stronger feelings of helplessness. (Kushnir 1982: 92)

Moreover, they may also be more likely to express their anxiety than men (Kushnir 1981:112), thus skewing the results.

What was the ultimate result of Skylab's fall on public attitudes?  Back in the 1980s, Kushnir felt that Glass's gloomy prediction of 1970 had only been reinforced by Skylab. Glass argued that there would be:

more and more massive resistance to technological change. I predict in equal measure a growing hostility to science .... Hence the fifth .... limiting factor in the growth of science - the psychological resistance of and the restricted support by a population inadequately educated in the understanding of science and militantly opposed to it because of its identification with the technological annihilation of the human environment. (Glass 1970:75)

Sure, it's very Cold War, but one could argue that at least part of this prediction has been played out in subsequent decades. How will re-entries like the UARS, which are highly publicised across forms of media that didn't exist back in the 1980s, in an environment where the public are increasingly aware of the problems created by orbital debris, affect attitudes towards space industry, exploration and science?

You can watch the UARS tumbling in its decaying orbit in the video below, shot by Thierry Legault with a 14 inch telescope in France on September 15th.

Space junk floating around the Moon

The picture below is a computer image made by Zoe Star Wardlaw, aged 7.  She is the daughter of my friend Alice Wardlaw. She explains it in her own words:

The moon is VERY BIG in my picture BECAUSE I want it that way and I like it that way. 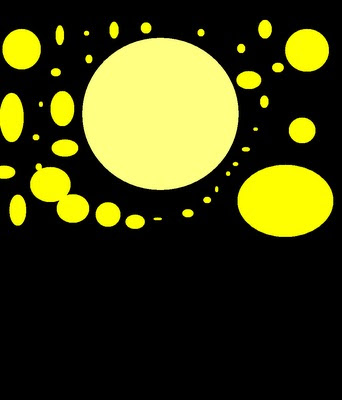 There are many things I like about this picture. The space junk is clearly in orbit around the Moon, and varies in size.  For some pieces, it appears as if we are viewing them on an angle, so there is a nice three-dimensionality to the picture.

I also like the fact that, for Zoe, space automatically contains junk.  She chose the Moon, not the Earth: she assumes that because the Earth is surrounded by space junk, so are all other celestial bodies in the solar system. This resonates with the way I conceive the space environment, not as a vacuum into which human material is interposed, but rather as a holistic entity.

It also seems a little odd to call orbital debris around the Moon 'junk', something I hadn't thought about until Zoe's picture. There's vastly less of it, of course, and it doesn't pose a threat to terrestrial commercial or military enterprises at present. I'd have to look up what is in lunar orbit, but I think of this space hardware, unconsciously, more as artefacts than junk, precious evidence of a past phase of lunar exploration.  This makes me think about how attitudes to space junk and space hardware change according to circumstances. When exactly did we come to think of stuff in Earth orbit as junk?  In my forthcoming Skylab paper, I talk about how Skylab's descent over Western Australia was co-opted into the application of the new Litter Act, introduced that very year as a result of a decade of the 'Keep Australia Beautiful' campaign. While concerns about orbital debris were certainly raised very early on, it would be very interesting to track how attitudes changed as the environmental movement gained momentum: a change from a colonialist, instrumental view of the world to one on which we have certain responsibilities.

So thank you, Zoe, for giving me food for thought! When Zoe is a famous artist (I won't insist that she stick to space themes), remember that you saw her work first on Space Age Archaeology.

Hot off the press! Heather and I wrote this a couple of years ago, and finally it is out. Not particularly spacey, but there is some thematic overlap in the idea of bombardment and bunkers, which continue into the Cold War. 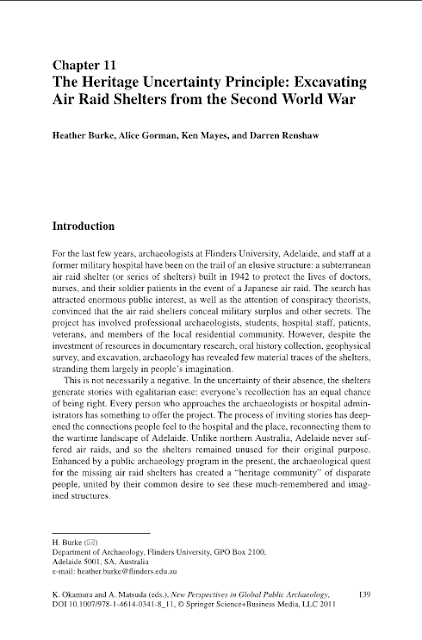 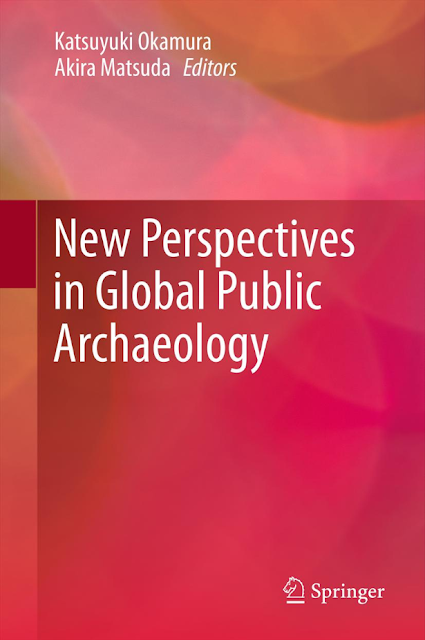 Well, I exaggerate a little.

Last week the National Council of Research in the US released a report calling on NASA to get serious about orbital debris.

Ashley Hall, a journalist from ABC's PM current affairs programme, called me for comment.  You can listen to the interview here.  He also talks to orbital debris guru Donald Kessler.

At the end of the interview, I make a case that Australia should become more than a passive observer to the efforts of the space agencies and the Inter-Agency Space Debris Coordination Committee.

There are a number of reasons why this makes perfect sense:

1.  Australia has a number of non-operational and functioning assets in space:  FedSat, Australis Oscar V, and the Aussat/Optus telecommunications satellites.  We rely very heavily on satellite services.  Orbital debris is a problem for us as much as anyone.

2.  Orbital debris often re-enters over Australia - a function of our large landmass and location.

3.  Because of both the above factors, not to mention plenty of radio-quiet space and political stability, Australia is ideally suited to host tracking and surveillance facilities (which we have done, and still do, a lot of).

4. We have a great track record in tracking expertise, and have local industries developing innovative capabilities in this field (eg EOS).

5. Recently we have signed a couple of agreements with the USA to increase collaboration on Space Situational Awareness.

6.  We are located in a global navigation satellite systems "hotspot" - in a decade we will have access to over 40 such systems (apparently).

7.  In the past (ie before the Howard era), Australia had a good reputation in middle power diplomacy.

8. Now that we are starting to take space seriously, with the Space Policy Unit and a new space policy on the way, and funding for space research, it is important to build our credibility.

9. Australia has a (rarely used) place on the UN Committee on the Peaceful Uses of Outer Space.

You see my drift?  If I hadn't managed to fill up my sabbatical with other writing obligations, I would write a paper about this for the Monthly or something like that.  Perhaps I still will.  Anyone want to collaborate on it with me?

What does the Moon mean to you? International Observe the Moon Night - 8th October 2011

International Observe the Moon Night (InOMN) will take place on October 8, 2011! Last year's InOMN included over 500 events in over 50 countries.  The theme for InOMN 2011 is "What does the Moon mean to you?" We hope to celebrate cultural and artistic connections to the Moon in addition to current lunar science research.

The InOMN Website has all you need to get started, including tips on hosting an event, tips for getting connected with astronomy clubs in your local area, free downloads, and more. Please consider joining us on October 8, 2011 as people all over the world stop to look up and ponder our closest neighbor!