Who knew space millinery was a thing?

Below are two 'outer space hats' by the French designer Hubert de Givenchy (who died in March 2018). They're less space hats than space agey, though.

Pierre Cardin loved a space hat. This one was made in 1965 and exhibited in Paris Refashioned 1957-1968, at the Fashion Institute of Technology in New York City. 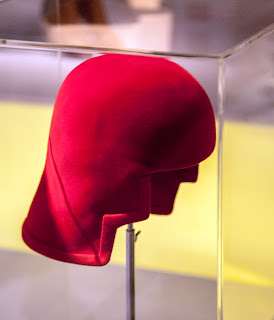 According to the exhibition catalogue,


Molded felt hats that resembled space helmets became a signature of Cardin’s work during the 1960s, yet the designer had introduced the style as early as 1958. Vogue described a hat from that year as 'a unique Cardin projection into outer space,' underscoring the couturier’s early interest in futuristic design.

These Pierre Cardin sun and moon helmets are pretty groovy too.


What, I wonder, is space fashion for the era of commercial and private space?