A funny thing happened on the way to the spaceport

Back in 2005, I was lucky enough to visit the Centre Spatial Guyanais in French Guyana. This is where the Ariane rockets are launched. It was amazing. I spent a couple of days in the archives, and drank a lot of ti-punch. Later, I incorporated some of my research into an article.

There were a few other people on the official part of the visit, and we took a group shot at the end. An acquaintance thought it might be amusing to re-imagine the Kourou spaceport as a landing rather than a launching site..... 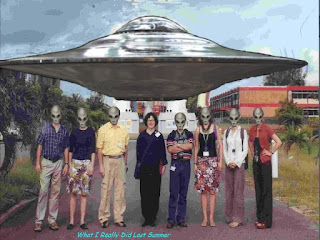