Preserving spacesuits and Tranquility Base

WASHINGTON — They have travelled further than any fashion item on Earth, surviving a hostile environment and extremes of heat and cold on a world far from ours. But now age is catching up with NASA spacesuits. "There is a lot of decay," admitted sadly Cathy Lewis, curator at the Smithsonian National Air and Space Museum, who is charge of looking after a dozen spacesuits worn on the Apollo missions.

She even has under her care the suit worn by Neil Armstrong when he stepped out on the lunar surface on July 20, 1969, and made history as the first man to walk on the moon.

But she agrees the passage of time has not been kind to these historic artifacts. "They don't do well because of the light and the humidity," she said. "They are made out of 21 layers of synthetic material. They are brittle," she said, adding that over time an ongoing chemical reaction between the different materials in the suits still encrusted with moon dust was taking its toll.

Displayed behind glass at the museum since the late 1960s, the spacesuits have been withdrawn to be restored or at least to halt the ravages of decay as the United States prepares to mark the 40th anniversary of the moon landings. "Most of them are in restoration, but we can put them on display in a controlled environment for a short period of time," said museum curator Allan Needell.

The custom-fit suits are made of a complex mixture of Teflon, polyvinylchloride and latex laced with tubing all aimed at allowing the astronauts to carry out their missions in the harshest of all environments. Today's suits have interlockable pieces so that none of the astronaut's skin is exposed to space, while multiple layers help protect the astronaut from extreme cold and heat. It is waterproof, fire-resistant and also made of the same material as bullet-proof vests.

Lewis said the spacesuits made for the 12 moonwalkers were "made for very hard conditions, but for a very short period of time." She said the gloves were coming apart, the metallic layers were rusting and the rubber joints were deteriorating.

The suits only spent a few days on the moon, where temperatures oscillate between minus 150 degrees Celsius and 120 degrees Celsius. But they have spent the rest of the four decades in some of the nation's most humid places, like Houston, Texas, home to the Johnson Space Center; Florida, where the Kennedy Space Center is located; or the museum in Washington, known for its sticky summers.

Lewis said that to preserve this part of history it is unlikely that the whole suits -- topped with a helmet with its visor blackened by a layer of gold to protect it from ultra-violet light -- will continue to be displayed. "We won't display them as a suit any more, but we hope to have the component on display in five years" such as gloves or boots if technicians manage to halt the decay she said. It depends on the funding, she added.

The lunar lander is also undergoing a make-over.

The four-footed module, which is seven meters high, is one of 12 constructed by NASA for the Apollo program which ended in 1972. The one on display never went into space but is identical to the others which were left on the moon when the astronauts returned to Earth.

Along with the astronauts' footprints still imprinted on the lunar surface, the museum curators are anxious to conserve the site of the original moon landings, especially as NASA gears up for a return by 2020.

"This is an actual artifact," said Needell of the landing site at the moon's Sea of Tranquility. "Let's hope the next ones won't put footprint over the old footprint at Tranquility Base. I hope they will leave it alone," he said, worried that future generations of moonwalkers may try to remove pieces of history and sell them on eBay.

"It's not abandoned property, it belongs to NASA," he stressed.

Dr Space Junk at the End of the World Symposium 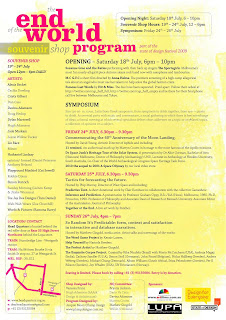 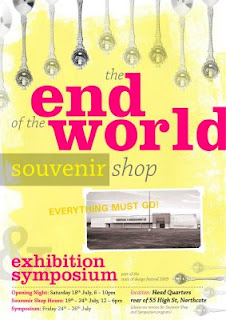 Next Friday evening, 24th July, I am talking at the End of the World Symposium in Melbourne, about the space heritage of the solar system. The evening is to commemorate the 40th anniversary of the Apollo 11 moon landing. More information is available at http://headquarters.org.au/index.php?/state-of-design-festival/end-of-the-world-souvenir-shop/. Do come!

Posted by Dr Space Junk at 10:19 am No comments:
Email ThisBlogThis!Share to TwitterShare to FacebookShare to Pinterest
Labels: Apollo missions, Dr Space Junk, Space and art, Space and popular culture 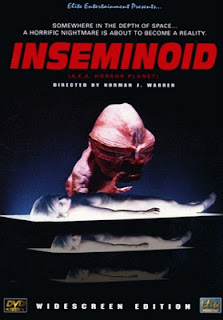 So finally I saw this cult classic, featuring a bunch of hapless space archaeologists and a nasty alien that impregnates one of the team for reasons unknown. I dare say it has some kitsch value for those who like this sort of thing, and I have decided that I don't. Still, no stone left unturned, etc etc.
Posted by Dr Space Junk at 6:48 pm No comments:
Email ThisBlogThis!Share to TwitterShare to FacebookShare to Pinterest
Labels: Cinema and space, Space and popular culture, space archaeology
Newer Posts Older Posts Home
Subscribe to: Posts (Atom)