The birth of the cable tie and augmented reality: a synergy 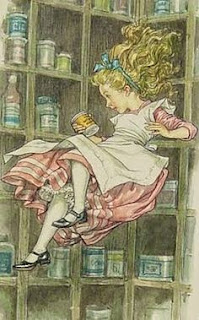 I love it when random things turn out to have a deeper connection. One of the joys of research is falling into those rabbit holes where only you can see the significance of the jars on the shelves, because of the chain of events that led you to be in possession of certain facts. Or perhaps a strong desire for vegemite on toast. OK, perhaps I can only stretch this metaphor so far.

(Incidentally, one of my recurring dreams evokes the Sheep's Shop in Through the Looking Glass. Needless to say, I identify strongly with Alice).

Readers may be aware of how one such serendipitous chain of connections led me to understand the significance of the humble cable tie, following a survey of the Orroral Valley NASA Tracking Station in the Australian Capital Territory. My research on the cable tie's history led me to inventor Maurus C. Logan, who worked for electrical outfitter Thomas and Betts. In the late 1950s, he visited a Boeing aircraft factory and watched the workers fitting a wiring harness. One of their tasks was to secure bundles of wires (cables) together with waxed string. The string turned their hands into a bloody mess, a condition known as 'hamburger hands' because their resemblance to hamburger meat.

'There has to be a better way', thought the kind-hearted Maurus, and so away he went and invented the cable tie. (More of the story will be told in my forthcoming publication on cable ties in Frederick and Clarke (eds) That was then, this is now: contemporary archaeology in Australia).

At the moment, I'm trying to piece together another story about two unusual material things, congohelium and computronium. My methodology is anamnesis and metaphor. I'm reading widely to try and 'remember the future' and ferret out of the deep recesses of my mind and viscera exactly what I meant when I put these two unconnected things together. What I'm really trying to say here is that I concocted a paper title because it sounded good, then wrote an abstract, and now have to find out what it's really all about. I'm choosing to make a virtue of what is really lack of planning. The anamnetic technique is based on the assumption that my unconscious knew something about why I connected these two things, and by using literature as a catalyst, I'm trying to draw it into the shallows of my conscious mind so that I can give a coherent paper at the Theoretical Archaeology Group conference in New York in two days.

My research has not been systematic, but I have managed to read a couple of things that have achieved that crystallisation for me. Good for the progress of the paper. But in the process, a cyborg rabbit, using its watch as an external storage device, has led me to a small piece of information that probably has resonated only with me in this precise way.

In the early 1990s, some engineers and scientists came up with the idea of Augmented Reality. Not virtual reality - this was not an attempt to digitally recreate the experience of reality. Augmented reality is rather the overlaying of new information on what we perceive in the everyday world. It's the sort of thing that proponents of wearable tech are exploring.

Have three guesses where this concept emerged.

At Boeing. In the context of aircraft wiring harnesses.

I nearly fell off my chair when I read this.

Now, as well as the issue of the waxed string and its terrible impact on human hands, one of the problems created by the evolution of aircraft was how to get cables into inaccessible parts of the aerodynamic structure. I believe that ferrets were at one period trained to carry the cables to remote parts of the aircraft structure where neither human nor hands could get. The point of the augmented reality was to enhance the invisible and future parts of the system with the idealised plan for the location of the cables in the harness. I'm guessing they didn't need the ferrets after that.

In writing this I'm struck by the disjunction between the - probable - constraints of aircraft structure and the need to get certain components into it in certain ways. Basically, they don't go well together. It's a more-than-awkward fit. Something always gives, whether it's flesh or aircraft or poor little ferrets. The system is mashed together so that it works, but there's always something sticking out, not smooth. Push it back in and it pops out somewhere else. Technology is not a smooth ball of functionality: it's a bag of snakes writhing and twisting within their boundary conditions.

So with these thoughts, I'll get back to my reading!

This image was taken at the Canberra Deep Space Communications Complex at Tidbinbilla, a wonderful place where the Voyagers' thin whisper is captured by metal paraboloidal ears listening with all their might, the limbs of dead and frozen antennas startle you as you turn a corner, and kangaroos lollop lazily about as if space communication was just one more passing fad and they were ready for a spot of afternoon tea grass, actually.

I couldn't help but think of Martian tripod locomotion when I saw this. It's quite a beautiful structure. It feels like it might just lift it's feet, creaking, out of the cement footings, and continue stalking across the landscape.