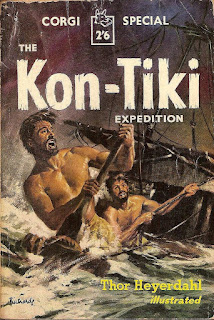 The name Alexander von Humboldt (1769-1859) first crossed my eyes as a pre-teen, when, after pestering my mother for something good to read, she gave me The Kon Tiki Expedition. I was instantly hooked and read it over and over again as a teenager. Thor Heyerdahl's daring 1947 expedition to South America on a balsa wood raft relied on the Humboldt Current to carry them part of the way. Thus I learned of the existence of this legendary scientist and humanist.

There seems to be a lot of Humboldt around at the moment, and I'm currently reading a round table critique of a 2009 book about him, The Passage to Cosmos, by Laura Dassow Walls.

Humboldt had what seems to be a rather modern view of the planet Earth, which prefigured the vision of the International Geophysical Year. He saw grand global processes and the connectedness which created a unitary Earth; this was reflected in his final (unfinished) five volume work entitled simply Cosmos.

He was so famous in his time that the state of US state of Nevada was almost named after him! This is how round table contributor Felipe Fernández-Armesto describes him:

He had started his scientific career like an encyclopaedist of the Middle Ages, gathering the learning of the world. He became the last magus of the Renaissance, attempting the blasphemy of comprehending the cosmos.

Michael F. Robinson notes his collecting obsessions: Barometers, dip compasses, pressed flowers, dead birds: they fill the Baron’s world. This is the kind of list which appeals to my archaeologist's heart through the contrast of artefacts hard, soft, dead, half-alive and never alive: equal weight given to the cold scientific instrument and the petals of an ephemeral flower.

Part of what resonates in this round table is the discussion of how Humboldt defied divisions between science and humanities, which were not as hard and fast then as they are now. I have been pondering this lately because, as a space archaeologist, I make it my business to read the relevant literature in the space science and engineering journals. I need to in order to pursue my research; it's as simple as that.

I notice, however, that this is often a one-way flow. Numerous of my colleagues in the space world will happily write and publish on themes of history, social sciences and environmental sciences without referring to the research carried out by scholars in those fields. Hence a lot of it reads as rather naive with undergraduate assumptions about human behaviour and the nature of scientific enquiry. They get away with it because their peer reviewers are equally unaware of scholarship outside their own fields. So it's nice to contemplate a great thinker who would have had none of these silos - even if he inadvertently helped create them.

a way of speaking, about nature that we now call ‘environmental’: namely, a planetary interactive causal network operating across multiple scale levels, temporal and spatial, individual to social to natural, scientific to aesthetic to spiritual (2009:11).

The message of Walls' book is that the divisions between science and the humanities no longer serve the world well. As someone trying to bridge these divisions myself, I cannot but agree.