Communicating the archaeology of the contemporary past: an experiment in methodology

Recently, I took some graduate students out to one of my favourite places, the former Orroral Valley Tracking Station in Namadgi National Park, Australian Capital Territory. We did some normal archaeological things (pedestrian transect survey, mapping with DGPS, RTK-DPGS and baseline-offset), but I also wanted to do something different, to see if methodologies touted as being distinctive to the contemporary past had anything to offer us as archaeologists.

This is what I asked the students to do: 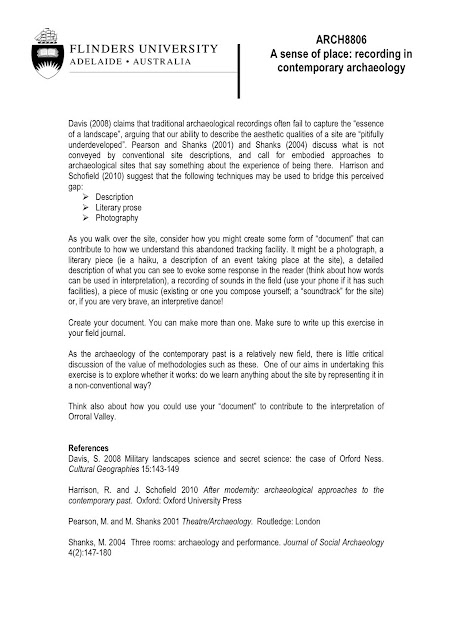 All that remains of a once vibrant facility, where over 100 people worked in shifts around the clock, is now concrete footings: the spikes and sky-gazing arcs of numerous antennas are represented by flat surfaces over which a person can walk without really registering what they are - as we observed with numerous Outward Bound hikers, who filed over the main antenna footing as if it were only a changing texture underfoot.  They seem to barely notice the interpretive signs. There are two generations of interpretive signs at Orroral; most people agree that the older ones are not very effective, but the more recent ones, which are far more informative, are only present at a few places near the most accessible parts of the site.  There's a lot of scope to do more, and this was also something I wanted the students to think about too.

So what happened?  Was this experiment worth it?  Most definitely, but not necessarily in the ways I was expecting.  And I wasn't really sure what I was expecting!

A few students took a little while to feel comfortable with the fact that it was THEIR instincts that were important here, and what appeared to be stupid to them was really exactly what I was looking for. Some were initially cautious, but no-one refused to do it or made too much of a fuss about it, despite the fact that it wasn't being assessed.

The first result was that approaching the site in this way caused the students to be very observant, paying attention to the meaning of ephemeral traces and relationships between structures.  They saw things that I had never paid any particular attention to, even though I was far more familiar with the site than they. Helen wrote an evocative piece about the fading white paint outlining parking places outside buildings such as the Minitrack Operations Building, a presence implying the absence of cars and workers. She noted that while these lines were "Ephemera appearing on no plan or map or survey, they have yet outlasted the buildings and hardware and people". Tom used photographs, from the interpretation panels, of the tracking station in operation and located the same perspectives now, juxtaposing the vibrancy of the peopled landscape with the silence of the concrete footings, and the decades of tree growth since the original photographs were taken. Steve put the people back in: on the flat floors without walls, he posed his fellow students carrying out activities that would once have happened in that building:  serving food in the canteen, sitting on a toilet, processing data in the operations building while looking at the view out to the 26 m antenna, sweeping the concrete curtain around the dish's base.

Cultural significance is not just about historic events and people; it's also about the senses, or what the Burra Charter (1999) defines as aesthetic significance (NOT to be confused with aesthetics).  Some students chose to engage senses other than sight, using both the real and imagined sounds of the site to evoke Orroral as it was in the past and in the present. Joan put a schematic engineering drawing of the 26 m antenna together with a broadcast from space: the voices of the astronauts communicating with ground control as the dish provided comms for a space shuttle mission, thus giving life and rapid movement to this monolithic structure. Jon showed a picture of the almost desolate, windswept northern end of the site, the valley enclosed by a bowl of alpine ranges that isolate it from radio interference, and played a recording of the wind and solitary bird calls: the loneliness of the abandoned tracking station that once spoke to the stars.

Poetry featured too. Lance asked us to close our eyes while he recited his words, removing us from the large common room and into his private vision; Susan used a whiteboard to draw the features of the site as she wove the outline of a yet-to-be-written poem together from fragments of the past and the present, a work in progress.


John, our intrepid technical officer, emerged in his fluoro vest, set up the dumpy level tripod, tipped a bag of rubbish on to the floor, and lay down with his hat over his face: the postprandial nap amidst the wreckage of lunch. The rubbish had been collected from the site: he had very carefully picked up drink and food containers on which the use-by date was after 2011, reasoning that they were actually rubbish and not artefacts as they half-existed in the future. In this careful act he has captured all the paradoxes of the archaeology of the contemporary past, and I think he was a little taken aback when I insisted that we keep his collection for analysis .......

Another principle of contemporary archaeology is 'making the familiar unfamiliar'. When you're looking at recent material culture, we are so used to it that we don't necessarily perceive its role in our lives. But, as Colleen Beck has pointed out, much of the technology of the recent past is anything but familiar. We all know of nuclear testing and the terrible deployments of these weapons, but could any of us identify the components of a test site and figure out what went on there? We all use satellite technology, but could we identify Orroral Valley as a tracking station by the layout and antenna footings alone? These kinds of places, which define the global technologies of the recent past, are frequently inaccessible and mysterious. They need interpreting; they're places that help us make sense of the world we live in.

Jonathan showed a photo of the 9 m antenna footing: much more intimate in scale than the big dish. He talked about popular quizzes where people have to guess what an object is. Asking us to place ourselves in the role of a 'lay' listener/viewer, he asked 'What is it?'.  Indeed. What, actually, is this circle of concrete with a sloped half-amphitheatrical wall behind it? How do we describe this structure?

The students connected a place, trace or structure with imagined human actions - and hence stories - creating new avenues for approaching the interpretation of the site and making it real. But the most stunning outcome was when the students presented their pieces before the small audience of ourselves and four visitors, Johnn, Geoff, Adam and Liam, who had joined us for dinner that night. I wasn't sure if our guests would want to stay for this part of the evening, but they were riveted. Afterwards, Johnn said 'You should do this for the ABC'. He made an interesting argument: because there were nine small snapshots of the site, all highlighting completely different things in different ways, there was something to appeal to the most diverse of audiences. If one approach didn't do it for you, then one of the others was bound to. So in terms of communicating with non-archaeologists, he saw this as a way of engaging the public effectively. The very personal choices the students made about what appealed to them, what caught their attention and how they expressed it, mirrored the diversity of the broader community, creating points of entree into what otherwise might be opaque technology. I was very struck by this insight, that reaffirmed a position outlined in Harrison and Schofield's recent textbook on the archaeology of the contemporary past: that we are the best authorities on the archaeology of us; that the process of autoanthropology or autoethnography is revealing of our own approaches to the material world.

And of course the question you're all asking - was there an interpretive dance?  Yes there was, but Chantal was too shy to perform it!

That was then, this is now: contemporary archaeology in Australia

In this workshop, we're going to explore what makes the practice of contemporary archaeology in Australia distinctive.  Naturally, I'll be doing the space thing.  If you'd like to be in my session, give me a hoy and we can have a chat about it!

CALL FOR PAPERS:
That was then, This is now: Contemporary Archaeology in Australia
February 16-17, 2012   University of Sydney

This two-day workshop explores the role of contemporary archaeology and the state of research in Australia. It is aimed at exploring the methods, theories and subjects currently informing this nascent field of study. What role might Australian scholars play in advancing this area of research?

This workshop is intended to be a platform for open conversation and discussion of ideas. Students, scholars and professionals are welcome to offer presentations of 15 or 30 minutes.

Topics may include but are not limited to: auto-ethnography, late twentieth and twenty-first century technologies, space archaeology, contemporary graffiti, urban landscapes, mobilities, new methods of archaeological practice (social media, art, performance, re-enactment), the post-human, archaeologies of protest, anarchy, internment, migration and the cold war, the body, affect and the narrative turn, the materialities of contemporary life.