Artefacts of the future: time travel and time-dependent states 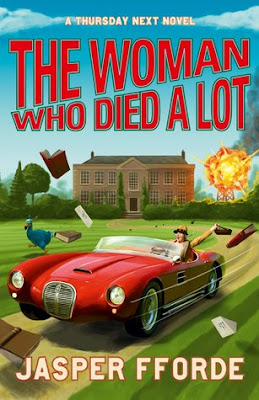 As usual, some of the most prescient and perceptive treatments of the archaeology of the contemporary past are to be found in literature. In The Woman who Died A Lot (Jasper Fforde 2012), an asteroid impact on Earth is predicted for the year 2041. In the passage below, our heroine Thursday Next discusses the likelihood of this event actually occuring, and how archaeological evidence works in the context of time travel.

We were currently at 34 percent likelihood, and this figure was derived from many sources - astronomical observation, computer modelling, level of divine concern, guesswork and archaeology - future archaeology. Artefacts from the future had been found, but dating was contentious as it is difficult to say when something was to be invented or built. Of course, something with a date on it beyond 2041 would be conclusive, but the fossil record  - both forward and back - is sketchy at best and, so far, nothing like that has turned up.

Despite Fforde's confusion of archaeology and palaeontology (*sigh* ... this happens elsewhere in the book also), the difficulty of distinguishing the future from the present, or even the past, on the basis of artefacts, is a point well made.

The present could be seen as a thin ephemeral layer on the surface of the Earth, with probabilities multiplying exponentially both forwards and backwards.  The material remains of future and past, as Fforde notes, are equally fragmentary. Taphonomy works in both directions.

Of course I am thinking about this in the light of my current task, which is to write my presentation for the Society for American Archaeology conference in Honolulu next week. I'm thinking about what we can learn from investigating the totality of orbital debris, not just interesting individual items within it. I've often talked about the value of the cultural landscape of orbital space, and now I'm trying to figure out what it means.

My half-articulated thoughts are about the breakdown of relationships between objects which were once connected (ie part of the same spacecraft, or launched on the same flight) but now, through orbital evolution, appear unrelated. Their original states cannot be retrodicted from their current position, unless they are being actively tracked. So it's about taphonomy, entropy and dynamical systems.

When orbital debris falls to Earth, it's falling into its own future, and our present. The tricky bit is recognition.

The Anthropocene in the Solar System

This is my abstract for an upcoming session on the Anthropocene at the Theoretical Archaeology Group conference in Chicago. No, alas, I'm not going to be there in person; I will be presenting in Skype mode. None of the conference registration and travel costs, but none of the conference partying either ......

A characteristic of what many are now calling the Anthropocene era is the redistribution of elements and minerals in patterns recognisable as the result of human interventions. Since 1957, the year Sputnik 1 was launched, approximately 6000 tons of human materials have been injected into Earth orbit, and more is thinly spread in various locations throughout the solar system. Mineral signatures rarely seen beyond the terrestrial sphere are now colonising interplanetary space. Their contribution to the estimated 40 000 tons of material from space that falls to Earth every year, including meteoroids and dust, is increasing. With the predicted acceleration of asteroid and lunar mining, the human impacts on space are likely to grow. However, the idea of the Anthropocene as constituted in an Earth/Space system has barely been explored. In this paper I draw on Nigel Clark’s concept of 'ex-orbitant globality' to situate the Anthropocene in a multi-gravity environment, moving away from the geocentrism that has dominated both archaeological and environmental approaches to understanding what space means.