Space: the final frontier of junk

It's home to everything from gloves to tool kits, spatulas to disused rockets, urine bags to relic Cold War satellites.  Space is quickly becoming a floating scrap heap, with more than 14,000 pieces of space junk larger than 10cm currently being tracked orbiting the Earth.

"I was just riding along on my bike and it was beside the road, beside a track out in the paddock," Mr Stirton told AAP.  "I just wondered what it was so I went over and had a look at it and I figured it must have fallen from the sky because there's no tracks or traffic or anything out here."

Mark Rigby, curator of The Sir Thomas Brisbane Planetarium, was called upon to identify the piece of space junk at the time and says due to our landmass Australia attracts much waste falling from space. "Because we are such a large land mass we do tend to collect space junk coming down," Mr Rigby said.  "The best example of that is Skylab in 1979, NASA announced it came down in the Indian Ocean then we heard all the reports from Perth and Esperance of blazing bits of space junk coming down.  Over the years we've had bits of Russian satellites, spherical tanks, a number of those sorts of things have been found in the outback."

It's crowded up there
Mr Rigby said the build up of clutter in near Earth orbit - about 3279 of the pieces are former payloads such as defunct satellites or probes - was beginning to become a massive problem for space agencies across the world.  "We've made the near Earth environment quite hazardous - it is a growing concern and there are international bodies looking at what we can do to clean this up and try and prevent it in the future," he said.  "Things like the International Space Station need to be manoeuvred every now and then to avoid the possibility of a collision, they don't like anything coming with in a few kilometres of it."

The threat of collisions is real with NASA saying on the website of its Orbital Debris Program Office an average of two windows on the Space Shuttle are needed to be replaced after every launch due to debris and micrometeorite impacts.  In the private sector a US communications company Iridium found out in February the danger of space debris when one of their satellites collided with a disused Russian military satellite, Kosmos 2551. Such collisions produce more small particles of space junk which then pose the threat of further collisions.  "Those pieces of debris will be up there for many many years," Mr Rigby said.

Recently an elderly British couple had a two-kilogram chunk of metal, part of a booster rocket, smash into their home.  "We heard this sound and went outside and saw this hole in the roof. The lump had destroyed two tiles and made an absolute mess," Mair Welton, 62, from Hull in north-east England  told The Telegraph.  "My granddaughter's boyfriend had to put on some oven gloves to fetch it because it was so hot."

In January of this year China drew the ire of all countries which operate satellite programs by shooting a missile at one of its own disused satellites, destroying it and producing hundreds of thousands of tiny pieces of debris.  In 2001, the MIR space station was, as part of a controlled re-entry program, crashed into the southern Pacific Ocean.  Looking ahead, Mr Rigby said the world's space agencies have future problems not just in cleaning up space but carefully negotiating the destruction of the biggest and most valuable object in orbit, the International Space Station.  "That will be trying to bring down several hundred tonnes of stuff and it's going to be tricky," he said. "One of the things which made Skylab unpredictable was solar panels which tended to allow it to skim along the atmosphere and instead of landing in the Atlantic, as they were predicting, it came down over Australia."

Call to save space rubbish
But Dr Alice Gorman, an archaeology lecturer at Flinders University in Adelaide, believes there is a duty to protect space junk for its cultural significance.  "It comes back to that basic thing in archaeology that the objects themselves have a significance not captured by written material," Ms Gorman told the magazine Archaeology in 2007.  "It's difficult this early on to get a sense of what kinds of questions people are going to want to ask of the orbital record, but early telecommunications satellites, for example, are the artefacts that created the modern world. We should keep spacecraft that are unique, or ones that represent a nation. Indonesia sent up a few satellites early on, and they're quite rare. Satellites that represent major leaps in technology are also notable, like the first geosynchronous satellite."

Professor Fred Watson, Astronomer in Charge at the Anglo-Australian Observatory, said Ms Gorman's comments were important to consider for the future of space travel.  "You might want to declare the Apollo landing sites on the Moon a heritage site because they are of great historical interest, the same is true of spacecraft but whether you should take something which is a hazard and make it heritage-listed is a different issue," Dr Watson said.  "Some of the spacecraft need to be actively boosted in orbit to keep them up there because otherwise they will come back down to Earth and that means you have to put energy and effort into that and you might not want to do that for the sake of history."

Dr Watson said due to the time it takes for some older objects to degrade, we still have time up our sleeve to assess their historical significance.  "The oldest is spacecraft in orbit is Vanguard One which was launched in 1958 and that is expected to remain in orbit for about 200 years before it naturally comes back to Earth, so it means we've got some time to find out if we want to save it as a heritage listed item," he said.  "By then we might have the wherewithal to bring these things down with something like the space shuttle but at the moment we just don't have that capability."

Spotting junk from home
Mr Rigby said it was not too difficult for amateur astronomers to observe space junk from their own backyard.  "To see a satellite or a piece of space junk you need to be in twilight or darkness and it needs to be in sunlight," he said.  "Morning twilight or evening twilight are good times but if you're trying to look in the middle of the night you won't see satellites and they'll be in the Earth's shadow.
For help spotting space junk, Mr Rigby recommended heavens-above.com, where users can set their location and see a map of all object currently passing over their area.

Is the U.S. Flag From Apollo 11 Still Standing?

Is the U.S. flag planted on the moon 40 years ago still standing? That's just one of many questions researchers hope will be answered this year by new pictures of old Apollo landing sites.

On the indeterminacy of rockets

More musings inspired by Ray Bradbury.   In his early stories, he talks simply of rockets:  generic, uncomplicated, obvious.  They don't have names or specific purposes:  they are just the vehicle of interplanetary travel. This seems indicative of a period where people don't really know what is going to happen in space.

Later, in the real world, rockets do have names and purposes.  They are the Saturn V, to launch a rocket to the Moon; the Blue Streak, to launch a nuclear warhead towards the USSR; the Europa, to launch a satellite into geostationary orbit.  They are no longer vague; they look different depending on their purpose, they have names and identities (military, civil, scientific, nationalist).

I don't know where I'm going with this.  Just thinking.

Ground zero in the outback: return from Maralinga 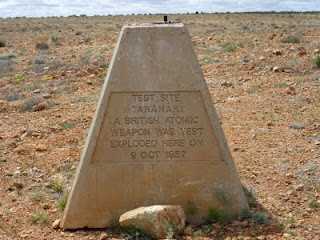 Back from Maralinga yesterday.  An amazing journey and I don't really know where to start.  Have to go through my field notes, label all the photographs, gather my thoughts.

We spent time roaming through Maralinga Village on our first day there.   On the second day we attempted to get to Emu Field, but constant rain forced us to turn back only a couple of kilometres from the village as driving conditions had become too dangerous.  Needless to say, the following day was clear and sunny .... Finally, before leaving, we went out to the major test sites at Taranaki, and the airfield.  Our host at Maralinga Village, Robin Mathews, told us that this airstrip was the only one in the southern hemisphere suitable for the space shuttle to use as an emergency landing site. 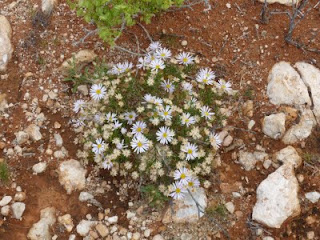 The most interesting thing for me, possibly, was the inconsequential surface artefact scatters - broken ceramics, beer cans, spam tins, nails etc, the small things that indicated the everyday life of the Maralinga staff.