The art of Dr Space Junk #1: the Cosmic Sieve 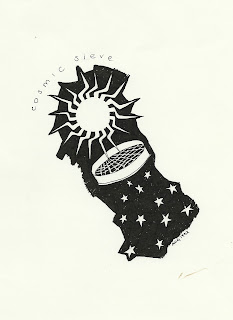 Years ago, I was a young archaeologist-about-town in Sydney, working mainly in Indigenous heritage management, but sometime historical stuff too (eg First Government House). I also held various positions on the Australian Association of Consulting Archaeologists, such as NSW State Representative and Newsletter Editor. It was while doing the latter that I made a number of illustrations to accompany particular stories or to fill in empty space. These were all drawn by hand in pen and india ink; there were no scanners or illustrating programs in those days.

I found this one in a portfolio of other archaeological illustrations, section drawings, lithics, site plans, etc. When excavating, all the deposit must be put through sieves, usually nested, to separate all the artefactual or cultural material from the soil for bagging and later analysis. We did an awful lot of dry and wet sieving in those days. A day on the sieves could be truly tedious if you weren't finding much.

This is the idea behind this picture, done in 1992.  This was long before I had any inkling that I would end up as a space archaeologist, so I think it's a bit prophetic. (And thank god I spelt "sieve" right in it!).

The wages of procrastination: a Skylab word cloud

Posted by Dr Space Junk at 9:19 pm No comments:
Email ThisBlogThis!Share to TwitterShare to FacebookShare to Pinterest
Labels: Skylab

This is how it happened. Dr Mick "Cheekbones" Morrison, the President of the International Year of Having Fun 2012 Kitty Sutcliffe, Dr Junk herself, Darlene McNaughton, and me, Dr Space Junk, are sitting around the kitchen table with perhaps a modicum of red wine already consumed, and fullish glasses in front of us. (You didn't know there was also a Dr Junk, did you?). Somehow, the conversation turns to saints, and one of us (maybe me, but not necessarily) wonders who the patron saint of aerospace, or spaceflight, or astronauts, is.

This is a problem quickly solved in this day and age. The iPhone of Dr Cheekbones invokes Wikipedia and we have our answer: it is a clerical dude called Joseph of Cupertino, who has this honour because he was a bit of a levitator.  Which makes perfect sense.

He was a bit of a few other things too, as I found when I consulted my trusty Oxford Dictionary of Saints back at home. (The reason I own such a book is because I once studied icon painting - not because of any religious convictions, being an atheist, but basically because I'm easily distracted by shiny things and a sucker for gold and gilt [without the "u", note].  My icon painting teacher, Michael Galovic, was very well known, and I loved the discipline of the art form, and the precision and uncertainty of mixing colours, and many other things. But that was another lifetime ago, when I lived in Sydney and was basically an itinerant digger and lithic analyst).

Anyway. Getting distracted already. It has to be said, upon reading the entry for St Joseph of Cupertino (or Copertino), that aspects of his life and character do not always reflect well on the astronaut class. I shall summarise.

In 1603, near Brindisi in Italy, Joseph was born in a garden shed because his father had to sell the house to pay debts. As a young boy, his nickname was 'The Gaper' because he would wander around open-mouthed.  He was also very religious, but did not make a good impression on the orders he tried to join:

... after eight months with the Capuchins [MONKS not monkeys] when he forgot to do what he was told, dropped piles of plates and dishes on the floor, and neglected to tend the all-important kitchen fire, he was dismissed (Farmer 1992: 270).

But his growing devotion and spirituality paid off and in 1625 the Franciscans allowed him to join as a novice.

Although very backward in his studies his extreme good luck in examinations enabled him to be ordained priest in 1628. His life thenceforward was distinguished by extreme austerity, many ecstasies [religious transportations NOT drugs] and apparently supernatural healings. ... Perhaps the most famous are his repeated levitations ... of which seventy instances were recorded during his seventeen years at Grotella.  The most spectacular were his flying to images placed high above the altars and helping workmen to erect a Calvary Cross thirty-six feet high by lifting it into place in mid-air 'as if it were straw'. Ten men had previously failed to lift it.  Such feats earned him the nickname 'the Flying Friar' (Farmer 1992:270-271).

He had a rather difficult career, running afoul of church authorities but also gathering a popular following. He died in 1663, and his feast is celebrated on the 18th September. He wasn't sanctified for the levitation thing: it was actually for 'extreme patience and humility' (Farmer 1992:271).

A life of extremes, it seems.

I'm struck by a few things here.  Firstly, what exactly constitutes this "extreme good luck" in examinations?  The answer lies in this rather gorgeous little prayer, reflecting a combination of desperation, naivete and outrageous cheekiness:

O Great St. Joseph of Cupertino who while on earth did obtain from God the grace to be asked at your examination only the questions you knew, obtain for me a like favour in the examinations for which I am now preparing. In return I promise to make you known and cause you to be invoked.

Secondly, the plate-dropping episodes, not to mention the cross-lifting, sound to me like he was half in and half out of terrestrial gravity. I'm not quite sure how to describe it. When he drops the plates, it's like the experience recounted by numerous astronauts on returning to Earth after stints in space: they become so used to the absence of gravity, that when they have finished using a tool or toothbrush or whatever, they simply let go of it, knowing it will stay where it is. In lifting the heavy cross, it's like he is in microgravity when everyone else is still in normal gravity: he's in some kind of tiny wormhole, lifting the cross as if it were in orbit where it would be weightless, rather than on Earth. It seems to me that these aspects of the story are more significant in the space sense than the actual levitation, which is a common enough thing among saints, mystics and shamans. (And dreams. Don't flying dreams just break your heart?).

I also like that this saint is no genius. He's a bit of a klutz, he's not that bright, he just fails to impress all round except when he's floating about in the air or having an eccie.  So, sans floating, he's more like you and me than the heroic, brilliant, manly astronaut of popular culture. The take-home message: believe you can do it.

Well there you go.  Instead of doing all my urgent tasks this morning, marking assignments, writing two conference papers, etc, I've spent a couple of hours mucking about with a bloody saint. Make of that what you will.  I blame the company I keep.