This is the life of a space archaeologist 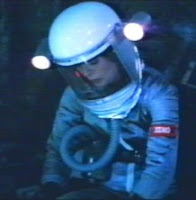 Ash Loydon has reviewed this film at the Cinedelica website. It sounds just too good and I think I will have to track down a copy immediately.


A group of "space archaeologists" are threatened after one of their number is impregnated by a big grasshopper......Understandably this causes her to go a bit mental and start hunting them down one by one.....which is nice, if not a little extreme.

Norman J. Warren does a bloodier, bad taste Brit version of Alien on a budget of £12.50 (and gets banned in Iceland for his trouble). Ineptly made, hideously contrived but incredibly entertaining....Inseminoid (aka Horror Planet) shows what space exploration would be like if it were run by Strathclyde Passenger Transport; Whereas the Yanks have shiny rockets, jetpacks and lasers, the British archaeology team shown here have buckets and spades, Kwik Fit overalls and a chainsaw(?) amongst their equipment.....oh, and big 80s hair.

Posted by Dr Space Junk at 11:30 am 3 comments:
Email ThisBlogThis!Share to TwitterShare to FacebookShare to Pinterest
Labels: Cinema and space, Space and popular culture, space archaeology

Shadow of the Moon

Last night I saw a preview screening of In the Shadow of the Moon, a documentary about the Apollo programme focussing on the experience of the astronauts. It was not a critical documentary, which was fine - its main interest lay in hearing the astronauts speak about how they felt at the time and afterwards. The rhetoric of nationalism (and masculinity to a certain extent) was present throughout most of it but only mildly.

A review described it as "uplifting" and I did wonder from whose perspective it would be so. Nevertheless, I did find parts of it uplifting, particularly the footage of the separation of the Saturn V stages, which sounds really boring, but was actually quite moving! And the docking manoeuvre for the return journey. There was also a fabulous sequence in slow motion of the Apollo 11 Saturn V liftoff, the camera still as the rocket body slowly moved past it with suitably majestic music, and then, as the base of the rocket came into the view, the music fading into the terrible roar of burning fuel. It made me feel much more - I don't know how to describe it - affectionate? about the Saturn V than previously.

Which makes me think about emotional attachment to space artefacts. I love Vanguard 1 and Asterix 1, but don't really have any favourite rockets. Why?

Well, that's not quite true - I am quite fond of Veronique and the Pierres Precieuses series. I guess what I'm wondering is why certain space hardware appeals to different people.

The archaeology of space exploration has been defined as a separate field, based on a chronological period – 1936 until the present - and a set of places, sites and artefacts associated with the contemporary era of military and globalising technologies. In this paper I want to explore the theoretical terrain of space archaeology. It could be regarded as historical archaeology, dealing with capitalist-driven colonial expansion and cross-cultural encounters; the archaeology of the contemporary past, where memory meets technology; industrial archaeology; or as an area of cultural heritage management. Other possible frameworks include cosmopolitanism and the consideration of large-scale evolutionary trajectories of the human species. Each of these approaches suggests research questions and future directions for analysing the material culture of the space age, which will assume greater importance as more nations coopt the heritage of space to support their claims to celestial resources.

Thanks to Steve for his excellent suggestion for the title! I'm still going to write a prolegomenon though, as a proper article rather than a conference paper.

A classical education occasionally has its benefits. Last week at the airport a chance encounter led to a discussion about the Mytilene debate and its implications for modern democracy.

Yes. The general consensus is that prolegomenon is too wanky a word to use in a paper title. So perhaps I'll go with Steve's suggestion of "Prelude to space archaeology". Shame - I was getting rather attached to the idea.

Posted by Dr Space Junk at 5:14 pm No comments:
Email ThisBlogThis!Share to TwitterShare to FacebookShare to Pinterest
Labels: space archaeology

Arthur C. Clarke and the lingua franca of the future

Who rules the moon controls the earth, it is true, but only to some extent - as Arthur C. Clarke pointed out once, control of GEO is even more important as telecommunications determine which culture achieves hegemony through linguistic dominance.

Hegemony is such a good word and reminds me that I am thinking of calling my WAC-6 paper "Prolegomena to space archaeology" because prolegomenon is an excellent word too. I think of them in the same breath as both are Ancient Greek words that have survived in English two and bit millennia later. But would such a title sound too arcane?

Who rules the moon controls the earth 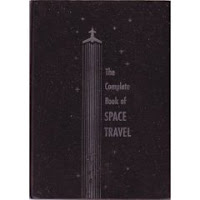 Posted by Dr Space Junk at 9:08 am No comments:
Email ThisBlogThis!Share to TwitterShare to FacebookShare to Pinterest
Labels: Cold War, Moon, Space and popular culture

Because I'm a bit impressed with my own cleverness in figuring out how to get it onto the blog, I wish to direct your attention to the slideshow on the right which covers some of the basic issues in the cultural heritage management of orbital debris. Unfortunately some of the text may be a little difficult to read (I'm not clever enough yet).

And I am so not procrastinating.

Yesterday I gave a lecture about Woomera to the University of the Third Age - a volunteer-run organisation aimed at retirees. There were quite a few people in the audience who had connections to Woomera of one kind or another. But the bit I liked most was the story of the Sputnik apples. To celebrate the launch of Sputnik 1 in 1957, one now-retired gentleman and his work colleagues stuck toothpicks into apples in Sputnik's antenna configuration and hung lots of them from the ceiling by string.

Bamboo skewers may have been a little more to scale but they are not such easy things to find in an office. A spray of silver paint would have been marvellous too (I'm getting ideas, you see, on the space party theme .... )

The literature, and my own discussions with people, suggest that in Australia the reaction to Sputnik 1 was very different to that in the USA. It was not perceived as a threat, it did not cause a national crisis of confidence. (Although it should be noted that not all scholars agree that that was the general reaction in the US). Instead, people found it interesting and exciting.