Just published: The Handbook of Space Engineering, Archaeology and Heritage 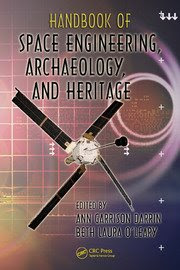 
Expanding the discipline of archaeology into the cosmos, this unique volume offers a perspective rarely considered. It discusses the trail of debris that humankind has left behind during space exploration as artifacts worthy of investigation, whereas they provide evidence to our heritage as a planet. Gathering together a number of leading thinkers, it discusses topics that are no longer merely science fiction. They discuss the landscape of space, spacecraft forensics and field techniques, our environmental footprints, and the establishment of an archaeological record in space. Highly authoritative, it goes a long way in separating fact from science fiction.

The scientific value of astronaut waste 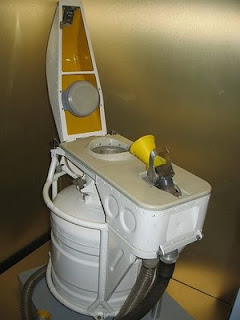 Thinking about this again after a conversation with Professor Maciej Henneberg from the University of Adelaide. At present, people only stay in space for relatively short periods of time. (The longest occupation was a USSR cosmonaut who spent over a year on Mir in 1994-1995). There are many health issues related to living in space; one of the major risks is prolonged exposure to cosmic rays and other high energy nasties.

So in terms of assessing the long term effects of this exposure on human tissues, we're lacking serious longitudinal data.

But wait! Perhaps we're not .... you see where I'm going with this. Studying human biomolecules from liquid/solid waste ejected during crewed missions could supply us with that data, without having to risk the health of actual people! The very fact that DNA and other complex molecules would have been degraded by high energy particles is not an impediment to scientific research: it is in fact the very information that we seek.

Of course there are many other factors to consider ... location and retrieval, dating the length of exposure, the source mission, the likelihood of survival in LEO, etc etc. We know that Mir was surrounded by a halo of frozen urine particles, and returned aerogel surfaces have preserved yellowed traces of impacts with it ... so perhaps this is the best way to obtain the samples.

Someone will be persuaded of the value of this argument eventually .....

The heritage values of Tranquility Base - from the Los Angeles Times 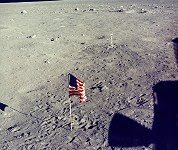 Needless to say, I agree with the argument presented here.

Space archaeology
The final frontier already has some historic sites -- such as Tranquility Base on the moon -- that deserve protection from well-meaning but potentially destructive private projects in outer space.
By Jill Thomas and Justin St. P. Walsh
June 1, 2009


Cultural heritage has emerged in the last few decades as a subject of increasing debate and interest. Controversies such as the Greek claim on the Parthenon Marbles, in the collection of the British Museum since 1816, the destruction of the Bamiyan Buddhas in Afghanistan in 2001 and the looting of the Iraq National Museum in Baghdad in 2003 have shown how objects and sites can have significance for both scholars and the public.

Man-made objects preserved in the vacuum of space are irreplaceable artifacts of humanity's scientific achievements. Although the United States retains jurisdiction over the equipment left at the moon's Tranquility Base, the 1969 Apollo 11 landing site, for example, Neil Armstrong's famous words highlighted the importance of the first moon landing for all of us: "That's one small step for a man, one giant leap for mankind."

Today, however, some of the most important elements of that shared space heritage, including Tranquility Base, are threatened. The Lunar X Prize, a $20-million award funded by Google, is being offered by the X Prize Foundation, which previously held a competition to develop private space travel. The first private group to land and maneuver a robotic rover on the moon before Dec. 31, 2012, will be the winner.

A "Heritage Bonus Prize" of perhaps $1 million (the actual amount has not yet been made public) will be given to the team that also sends back images of man-made objects on the moon. In order to take photographs of these artifacts, groups would have to first target their craft to land close to a previous landing site, then move their rover as close as possible -- even into the area where human activity occurred 40 years ago.

The rules for the competition state only that participants seeking the Heritage bonus must have their plans approved by the foundation "in order to eliminate unnecessary risks to the historically significant sites of interest," but there is no explanation what criteria will be used to judge risks as "unnecessary" or what steps are recommended to avoid damage.

The sites of early lunar landings are of unparalleled significance in the history of humanity, and extraordinary caution should be taken to protect them. Armstrong's iconic footprint and the American flag placed by the astronauts may yet be intact -- there is no wind or rain on the moon to damage or destroy them.

NASA, the most experienced, successful and best-funded space agency in the world, has occasionally found it difficult even to place satellites in orbit. And those missions are far simpler than landing a robotic rover on the moon within a kilometer or two of a specific, and culturally important, location. Private groups operating on much smaller budgets and attempting such a project for the first time are likely to encounter failure. But far more catastrophic would be a near-success -- a crash landing, for example, in which a historic site was damaged or destroyed.

One team in the competition, Astrobotic Technology, plans to launch as early as December 2010, with Tranquility Base as its stated target. It is not too late for the sponsors to withdraw their bonus prize for approaching and imaging lunar landing sites. Indeed, they should ban competitors from targeting regions within 100 kilometers of prior lunar landings, with violators excluded from receiving any prize money. The bonus money could instead be offered as the award in a competition to design plans for studying, preserving and protecting sites such as Tranquility Base, and presenting them to the public.

We have no doubt that space tourism, perhaps even as envisioned by the X Prize Foundation, will be a reality someday. The competition itself has already inspired interest in the Apollo sites among the general public. Once lunar travel becomes easier, there will also be significant interest from scholars in the emerging field of space archaeology. The demands and desires of both groups must be respected. But in the absence of effective international agreements that treat space objects as heritage, it is necessary to take a step back and consider what the best strategy would be for permanent preservation of sites and objects of historic significance.

We have the opportunity now to ensure that there will still be something there to see when tourists eventually visit, and for our descendants to understand and appreciate.

About the authors: Jill Thomas is a graduate student in Louisiana State University's School of Art who has done research on cultural heritage in space. Justin St. P. Walsh is an assistant professor of art history and archaeology in the school.