He’s affable, writes well, is sharp as a tack and he’s unemployed. He’s also Norm Augustine, about as close as you get these days to the giants of the aerospace business like Curtiss, Hughes, Tripp and the guys who used their initials to start a cool company called TRW.

When this former CEO of Lockheed Martin, and recent head of the Augustine Committee charged with reviewing America’s manned space flight plans, says a treaty on space debris is a good idea and that we have a “window” in which he thinks one can be cobbled together, it’s worth listening.

Augustine made his brief remarks about a space debris treaty today during a panel organized by the Center for a New American Security (AKA the Obama administration’s team in waiting) on “the global commons.”

For those who may have missed it, concern about space debris exploded (sorry for the pun) when the Chinese destroyed an out of commission weather satellite in January 2007. That strike created roughly 10 percent of all space debris, increasing the risks to any human in orbit, as well as to satellites in low earth orbit.

Currently, the Inter-​​Agency Space Debris Coordination Committee tries to encourage its members to limit the amount of debris they create. Also, the United Nations Committee on the Peaceful Uses of Outer Space (known to space geeks as COPUOS) keeps an eye on the issue. Neither one has much clout beyond moral suasion.

Posted by Dr Space Junk at 9:18 am No comments:
Email ThisBlogThis!Share to TwitterShare to FacebookShare to Pinterest
Labels: COPUOS, orbital debris

Satellite tracking and the origins of the USB

I'm reading the Goddard Space Flight Centre's guide to using the STDN (Spaceflight Tracking and Data Network), of which the Orroral Valley Tracking Station was a part.  It was written in 1974, when the network had been in existence for about 15 years or so.  (In fact it's getting quite hard to work out the divisions between the networks - DSN, MSFN, STADAN, STDN, etc).

(And there is an antenna called SATAN).

I've never thought about what USB stands for before.  But the following quote from the STDN User's Guide suggests that this is its origin:


the fact that multiple support functions may be accomplished by this single "unified" system).

The 11th ASDC will be held July 5 - 7 2010 in Adelaide, Australia.
The conference will build on the success of the 10th ASDC and provide a forum for discussion and implementation of the Australian Space Research Program.

The program for the 11th ASDC will be posted on the website shortly. Positions on the program are by invitation only, however if you would like to speak or to suggest a speaker, please contact the organising committee.

Every two years the Australian Space Development Conference Series brings together space focused organisations to share ideas, renew relationships and forge new links for the future. In 2008 the theme was "making sustainable decisions" and speakers from industry and government discussed the way forward for Australia. In 2010, the conference will be focusing on the progress of the Australian Space Research Program and looking at ways to support and build the ASRP in coming years.

In 2010 the ASDC will host a technical conference in parallel with some of the ASDC sessions, to encourage more complete networking across the Australian space Industry. The "National Space Engineering Symposium" is the flagship conference of Engineers Australia's National Committee on Space Engineering.

Posted by Dr Space Junk at 5:36 pm No comments:
Email ThisBlogThis!Share to TwitterShare to FacebookShare to Pinterest
Labels: Australian space

The changing landscape of space in Australia

From the desk of Brett Biddington, Chair of the Australian Space Industry Chamber of Commerce.  Full newsletter is at  http://www.symbioscomms.com/ASICC/newsletter.html#Landscape


2009 may well prove to be a turning point for space activity in Australia. The Australian Government has moved from a passive to an active position on space matters and has shown a willingness to invest not previously seen. This switch did not just happen, as if by magic. Over the past five years a series of papers and reports were written and reviews held which, together with rapidly changing world circumstances provided both context and triggers for change. In 2008, in particular, there was a Senate Inquiry in Australia’s involvement in space which recommended a more active stance in future. Also, the review of the national innovation system, conducted by Professor Terry Cutler, called out “astronomy and space science” as one of six areas which warranted specific new investment for research. Recently the Government released its formal response to the Senate report – accepting all of the recommendations and pointing to action already underway to overcome the deficiencies noted by the Senate.

Two other documents are important, the statement on national security made to the Parliament on 4 December 2008 by the Prime Minister and the Defence White Paper released early in May 2009. The former is the first systematic review of Australian national security ever and the latter makes clear that the defence of Australia depends on assured and secure access to space and that the Australian Government is seeking to become relatively more self-reliant in space capabilities. The White Paper foreshadows that Defence may seek within the next 10-15 years to acquire a surveillance satellite and, more importantly, to develop a dedicated cadre of space professionals within Defence.

In terms of science, a draft Space Science Decadal Plan (SSDP) was released in 2008. The Australian Academy of Science has recently advised that the plan has been accepted by its Executive Committee and will be formally launched early next year. The SSDP precipitated the production of an Australian Strategic Plan for Earth Observations from Space, which was released in August of 2009. In December the timing and navigation community hosted a very successful conference on the Gold Coast – GNSS 2009. All sectors of the space community would seem to be awakening.

Above all, the Australian Government, in the May Budget, announced that it was going to establish a grants program to fund space science research and education. An initial sum of $40m has been allocated to be spent over four years, however the intent would seem to be to make this an enduring program. Of equal, if not greater importance, a further $8.6m has been allocated to establish a Space Policy Unit within the Department of Innovation, Industry and Resources. This unit is charged, in addition to administering the grants program, with producing a national space policy within the next 12 months to comprehend national security, civil, commercial, educational, research and international relationship matters.

What is the Government Seeking to Achieve?
The view of your writer is that the Australian Government is taking a “3C’s” approach to space activity in Australia. Through national and international collaboration, the Government is seeking to build space capacity in Australia in order to substantially strengthen Australia’s international credibility in space. The Government is seeking to move swiftly on all fronts which presents all involved in space activities in Australia with an unprecedented opportunity to bring together previously disparate elements into a coherent space sector with educational, research and industry elements. The entire effort is underpinned by a comprehensive communications strategy.

What is Different from Past Attempts to Establish a Space Industry?
The key distinction is that the initiative, this time, has come “top down” from Government. Government has recognised that Australia’s national interests are not capable of being realised whilst the nation continues to under-perform in space and this is what it is seeking to redress. Previous attempts have been “bottom up” and have tended to assert that Australia needed a space industry without providing a compelling business case. This time, there is a clear champion, something lacking in the past and there is strategic purpose and intent.

Conclusion
Providing the projects which are funded through the grant process deliver quickly and compellingly, there is every reason to be confident that Government will continue to support the systematic development of national capacity in space in support of national objectives. Our challenge is to work quickly and collectively to ensure that the opportunity presented by Government is seized and brought to fruition. 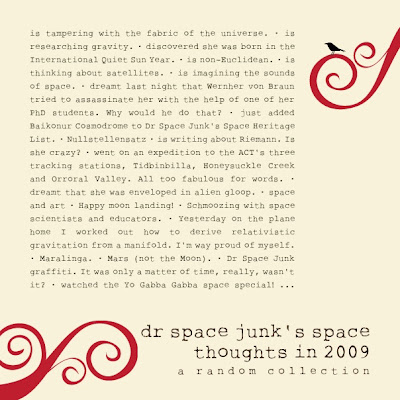 Many things have conspired to prevent me from making a New Year's card this year - a bloody big conference, a plethora of nieces, nephews, and godchildren, and now a nasty cold.  So this is my offering for 2010, created from Facebook statuses.
Posted by Dr Space Junk at 1:36 pm No comments:
Email ThisBlogThis!Share to TwitterShare to FacebookShare to Pinterest
Labels: Dr Space Junk
Newer Posts Older Posts Home
Subscribe to: Posts (Atom)