I think this is terribly significant: the first nation-state outside the USA and former USSR has placed material on the moon. From ESA:

The Indian Space Research Organisation's lunar orbiter Chandrayaan-1 released a probe that impacted close to the lunar south pole on 14 November. Following this, the instruments on the spacecraft are being switched on to get the science observations started.

Posted by Dr Space Junk at 5:53 am 2 comments:
Email ThisBlogThis!Share to TwitterShare to FacebookShare to Pinterest
Labels: Moon, Space heritage

Venus is so bright tonight

A lovely spring evening - as the sun set, I was sitting in the garden with my good friend the geophysicist I. Moffat, drinking red wine and watching how Venus caught the light of the dying sun. Mercury, also pretty spectacular. I thought to myself: I am looking at the planetary surface where the Veneras and the Vegas (complete with their diamond and sapphire windows) are sitting on the surface letting the slow winds caress them, an erosion process that will see them still intact when the solar system is at its last gasp.

Remembering also, that as a child I was fascinated by Babylonian observations of Venus. They seemed all the more mysterious, scientific and profound because I myself could not really see the stars. I was short-sighted from early childhood, and everything in the sky looked blurry to me. I also could not understand how my father recognised species of bird (he was a Neville W. Cayley fan from way back), assuming that some people could see things in patterns of flight that I was simply not capable of. Well, all that changed when I got glasses at age 11 - I could tell a planet from a star after all! And I could tell those bloody birds apart. Perhaps the heavens were so entrancing because I could not really see them. Perhaps the allure of science was all the stronger because of blurry vision ....

But possibly I digress. Venus is so bright tonight and I imagine myself a Babylonian astronomer, observing its phases. Taking the accumulation of traditional knowledge, thinking Tiamat (or whoever it was), and arriving at plausible theories for what was happening. Those guys were way cool.

I mentioned the red wine, right?

Well, we didn't win, but the book was one of two runners-up highly commended by the judges. Well done to our fabulous editors John Schofield and Wayne Cocroft. Apparently Left Coast Press are considering a paperback edition now.

My darling friend Jack Dwyer, president of the Newcastle Space Frontier Society, wrote to me earlier in the year:

When does the DR. ALICE GORMAN AND THE SEARCH FOR SPACE JUNK movie come out again?! You know, a trilogy in at least four parts...:

DR. ALICE GORMAN AND THE SEARCH FOR THE STOLEN SKYLAB PIECE.

I rather fancy this idea. I am full of demands at the moment, but if I can persuade someone to build me a model of the Love Pygmy, why can't an aspiring filmmaker take this on? Score by Philip Glass, of course.

The archaeology of the Love Pygmy

Last week I did an interview on ABC radio, and Jim Traill, the producer, asked me about the Love Pygmy. There is a story behind it, needless to say, which features among other things the Andaman Islands and Madame Helena Blavatsky. But it's complicated and I can't summon the brain strength on a Sunday arvo to explain how the Love Pygmy came about.

However, thinking about this, I thought someone ought to make me a model of the Love Pygmy. Real or virtual. I have a vision in my head of what I think the Love Pygmy should look like, and there are some parameters: the Love Pygmy has its own museum inside, and is capable of very quick and fluid on-orbit manoeuvres. It is also partly inspired by spacecraft scavenging as described in Tiger Tiger by Alfred Bester (I refuse to use the US title of this work). I think there may be a 1950s/60s aesthetic to it, but this is very vague. 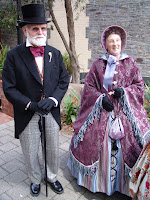 Yesterday I had a most amazing experience. At a session on Victorian etiquette, organised by Dr Heather Burke for her historical archaeology class, I met Mr John Smith (pictured here with Mavis Smith). He is a specialist in Victorian culture and - worked on Blue Streak at Spadeadam, Woomera and Kourou. It seemed so incongruous to be talking rockets with an elegantly attired Victorian gentleman! Of course we barely scratched the surface at this initial meeting, and I hope to catch up with him next week to learn more of his experiences.

Don't get too excited, I'm just thinking about it.

The graveyard orbit is located above the Geostationary ring, where most of our telecommunications satellites operate. Many of them are left with sufficient fuel at the end of their mission life to boost them into this orbit, where they are out of the way and not contributing to the debris problems in GEO.

It's not that they are now simply inert - I have seen discussions of how material in the graveyard orbit can impact on spacecraft in GEO - and let's not forget that we're talking about many-body problems here with all the instabilities of non-linear systems, so they may not always just circle up there serenely - but to all intents and purposes nothin' is going on in the graveyard orbit. It's not premium space, no-one wants it at the moment for anything except as a junkyard.

So if we were going to propose anything for world heritage listing in space, this may be a good choice: uncontroversial in terms of competition for space resources, without the nationalist interests of places like the Moon, and easy to enforce!

The WHL cannot be applied to space at the present time, but I'm working on this with the help of my graduate student Nigel and space lawyer Anthony Wicht.

The question of its significance is another I'll have to investigate.

From Earth to space and back again

Last Monday my colleague Marc Twining, Senior Geologist with Iluka Resources Ltd, spoke to my Indigenous Heritage Management class about how mining exploration and heritage intersect. Iluka principally mine heavy mineral sands (HMS). Now I've done my research, so was well aware that these minerals (like rutile and ilmenite) end up in white pigments - paint, ceramics - this is why toilet bowls are so shiny and white! - but when Marc mentioned titanium being extracted from HMS, I made an obvious connection that had escaped me before.

Titanium is a metal very important to spacecraft manufacture. Pressurant tanks are usually made from it, and the USSR Venera series, which had to withstand the high pressures and temperatures of the Venusian surface, were constructed around titanium shells.

So there is, to my mind, a lovely symmetry here. Titanium is extracted from HMS on ancient beaches far below the present surface of the Earth, made into spacecraft which enter Low Earth Orbit, and when those spacecraft re-enter the Earth's atmosphere, the titanium spheres survive and fall back to Earth. If undiscovered, they may well become buried in their turn .....

This is my terrestrial/celestial dynamical system in action, complete with taphonomy.