He said, she said, and what the dictionary said

Friend! When a woman answers your question, don't believe her; but if she keeps silence, believe her even less.


He said, she said

There's an aphorism frequently applied to rape cases. In the absence of witnesses, detectable physical injury or, these days, DNA evidence, people say it comes down to a matter of 'he said, she said'. At which point they throw up their hands and exclaim it's too hard: what are we to do?

But think about it. Although the words are symmetrical, this is not a balanced equation. The problem is not what he said. It's what she said. Because she is likely to lie or exaggerate. And if you believe her, a man's life will be ruined.

Only, in reality, she is more likely to be disbelieved, and his life is rarely ruined. Her life, clearly, is of lesser consequence. This is because women's speech, how it sounds, what they say, and its relation to 'truth', is suspect and problematic. There is no similar expectation that men will lie about committing rape or sexual harassment. Everyone, on the contrary, is in a hurry to believe them. They're a 'good man',  they wouldn't hurt a fly, and so it goes on.

Nothing demonstrates the hidden foundations of this discourse better than the so-called provocation defence, still accepted in a few Australian states and in other countries. It allows men to literally get away with murdering their female partners. The principle is that if provoked, it is understandable that a normal person may 'snap' and lose control of their actions, so that they don't realise what they are doing. It is most frequently used as a defence by men who kill women (but also for what has been called 'gay panic').

In one case, which happened in the last decade, a man murdered his wife because she had told him she was leaving him for someone else. As he reported it in court, she had taunted him and said her new boyfriend was a better lover. At this point, he killed her.

There were no witnesses. No-one can corroborate that she said those words to him. She was not there to tell her side of the story. But what 'he said she said' was enough for the judge to rule that he had been provoked. He was convicted of manslaughter, and given a light sentence. She stayed dead.

There's been too many of these over the years, including the high profile case of Vicky Cleary, that turned her heartbroken brother Phil Cleary into a campaigner against male violence and the complicity of the law.

The twittering of birds

The very sound of women's voices is questionable. Many people (including some women) can't stand hearing women's voices on the radio. They're too high. They sound like children. They don't have enough gravitas to read the news. The number of comments online which run along the lines of 'I'm not sexist, but I can't listen to a female sports commentator' are legion.

Women's speech has been compared to the twittering of birds. (Perhaps this is partially why Twitter has been such a huge factor in invigorating new feminist activism). There's even evidence to suggest that as women progress into higher positions, they lower their voice in order to fend off these sorts of reactions.

Over the last couple of weeks the language used to describe women's speech has been in the spotlight. In July 2014, Nordette Adams pointed out that the online Oxford Dictionaries used 'a rabid feminist' as an example of usage in the definition for 'rabid'. You can read her post about it here. In January 2016 Michael Oman-Reagan also noticed this and began tweeting about a number of other examples of usage that were .....dodgy, to say the least.  His account is here.

It turned out that there were many negative words that were associated with women's speech. The included rabid, shrill, grating, nagging, bossy, shrew, gossip. As a theme, they all add up to support this very, very old idea that there's something wrong with what 'she said'.

What's in a name? Or an adjective?

What a feminist says is like a slavering, diseased dog: full of violence, unable to discriminate between friend and foe, taken by madness, unintelligible, not obeying orders to sit, stay. She is a bitch, after all. 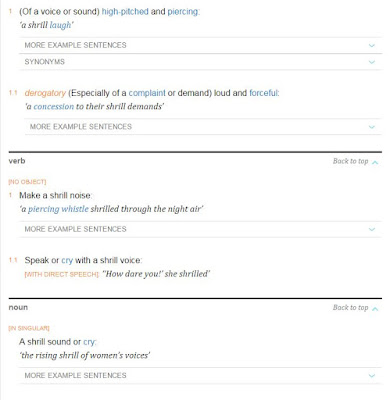 Women's voices are shrill, high-pitched, grating, piercing, unpleasant to listen to. It's even worse when there's a group of them. You can't distinguish between one woman and the next, they all sound alike. 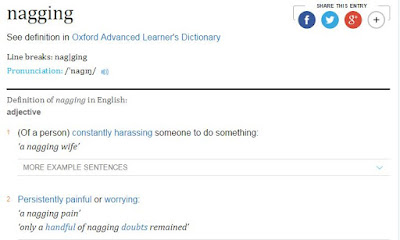 When women speak, they are nagging men, harassing them 'to do something'. Isn't this rich territory for comedians and those dreadful cartoons that appear in the sort of magazines you used to read in the doctor's waiting room? Like Readers Digest and, oh yes, the New Yorker? They are being unreasonable, asking the man to do something that's not important, or he'll do when he's ready. And they've asked him more than once! Wives, if you nag, you'll annoy your husband, he'll leave you for a younger woman.

This trope is accepted without considering the power dynamics behind it - the man annoyed that he is expected to pull his weight in the house instead of having everything done for him, the woman trying to manage house, children and frequently a job in which she is not supported or treated as an equal. Women think they are sharing family responsibilities equally but as their labour is not recognised as such, their partners think they are being unfairly asked to do additional work. The use of the term 'nagging' to describe requests to share work makes it the woman's problem. I could go on.

She's not the boss, she's just bossy. Her authority is not accepted. You don't have to do what she says. 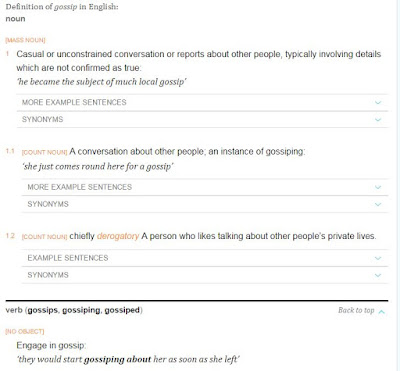 She gossips. With other women. It's idle, frivolous, malicious. She might be talking about men, about YOU! with the other women. You can't believe anything she says, it's just gossip. It's not true. Those women, when they get together.....

I grew up learning that men talk, women gossip. One day, I think I was at high school, as I waited for my father to stop talking to someone so we could leave, I realised that it wasn't true. He was not talking about serious matters. HE WAS GOSSIPING. It was one of those baby steps on my way to becoming a RABID FEMINIST. 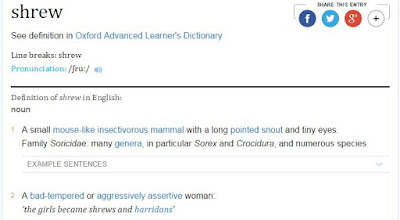 Or perhaps I became a shrew. Girls start out nice and docile, but they become shrews and harridans, with opinions, nagging, always wanting their own way. The other women got to them, you see. Don't listen to what the other women say.

Don't listen when they say it happened to them too. It's rumour, speculation, hearsay. It's not evidence. It's just what 'she said'.

Acknowledgements: many thanks to Michael Oman-Reagan for his fearlessness and strong support of women's voices.
Note: screenshots are taken from Oxford Dictionaries (http://www.oxforddictionaries.com/) on 30 January 2016. As a result of the discussion, they are undertaking a review of the examples used.