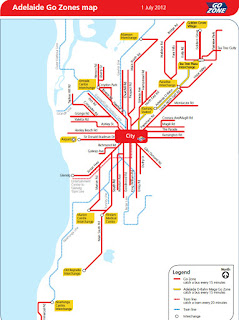 Most mornings I wait at a certain bus stop to catch the 300 up to Flinders University. There's a large tree, and a strip of scraggly grass on clayey soil. When it's really wet, I have to watch my steps as it gets quite slippery. Along the streets are houses and one business, a mower shop cheerfully painted in bright yellow and green - very useful as in the dark as a landmark.

Often when I'm standing there waiting, I notice small items of rubbish. Sometimes I even collect them, thinking of my Modern Material Culture class. One time it was a small pink plastic flower with a flat back, that looked like it had fallen off a toy. Once it was a battered piece of orange plastic bunting, still attached to a section of rope, and a crushed texta lid. A couple of mornings ago, there was a broken glass bottle in the street, and I collected a fragment which, in a different context, might be mistaken for deliberately flaked glass. This one was for my Archaeology of Australian Stone Artefacts class.

It's best to collect objects quickly, as they often don't last long. Since Monday, the broken glass pile has diminished. There's none of it still to be seen on the grass verge where I'm standing, only on the asphalt where it was smashed. I don't know where the stuff goes. Blown or washed away, or does a council employee come along at night and pick the grass clean? Perhaps the movement of humans, dogs, birds and bicycles shuffles the artefacts along until they're just out of my sight.

With a pocketful of snap-lock bags and a will, I could make this into an interesting experiment. I could, each day, collect whatever I could see in my 5 m radius. Some days it might be nothing at all. I'd have to take note of weather, visibility, any local events that might be relevant. For example, I'm pretty sure the orange bunting derives from the installation of the controversial NBN cables in the street.

How long have these objects been in the street before they pass my bus stop? I assume they're recent, but perhaps they have been circulating for a while. I could tag one and see how far it travels. Perhaps the crushed texta lid originated out Salisbury way, and has traveled through the streets and gutters of Adelaide town to my bus stop, only to be captured and objectified.

What is their life span? How long does it take before UV exposure, and chemical and mechanical weathering cause these objects to disintegrate? What is their size range? Do they fly under the radar because they are generally small, less then 10 cm or so? What makes them so invisible?

What would I find out if I collected them for a year?