Random thoughts about gravity and science

Saturday night. A quiet one in - I have a number of graduate students' thesis and report drafts to work through, and I'm thinking I might catch a bit of Graham Norton later in the evening. Debating whether to open the bottle of red I ended up with at the Flinders Archaeological Society's Quiz Night at the Adelaide Gaol, Wednesday last week. Might not help me appraise the students' data analysis with acuity, though.

On Thursday I got a new book, Robyn Arianrhod's Seduced by Logic. Emilie du Chatelet, Mary Somerville and the Newtonian Revolution (University of Queensland Press, St Lucia, 2011). I'm a sucker for a bit of mathematics, and with some girlie brainboxes thrown in, a good read is sure to be had by all. (Also, it features Voltaire). 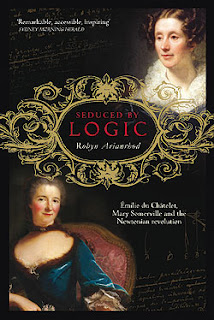 A few years back, I was cheeky enough to write about gravitation myself (The Gravity of Archaeology, 2009, Archaeologies 5(2): 344-359). I'm sure I'd never get anything about gravity published in anything other than an archaeology journal, despite an invitation from the Journal of Modern Physics to contribute to a volume on cosmology and gravitation! I guess what fascinates me most about gravity is just how mysterious it really is.

In high school physics, you learn about mass, gravity, velocity, acceleration, entropy, etc, and have to solve endless tedious problems about them. As a kid, you don't really question any of it. Years (and years) later, I find myself troubled by these questions. I mean, what is mass, really? And force? If you called them something different, would you think differently about them?

I suppose one of the values of literary excursions into the history and philosophy of science is that they afford you new ways to conceptualise things and make the links between them.  Reading Arianrhod's book, I found myself musing that one of the virtues of Einstein's general relativity was that it explained the spooky action-at-a-distance aspect of Newtonian universal gravitation.


(And it was Newton who made space empty - because he had to get rid of ether as an explanation for the motions of the celestial bodies. But what are stupid gravity particles if they're not ether? Anyway I don't think gravity can be a particle. It has to be a movement).

And that thought recalled to my mind a book I haven't finished reading yet, by famous Australian postmodernist Elizabeth Grosz. Can't remember what it was called even, it's buried under a pile of papers in my office. (Actually it might be this one: Space, Time and Perversion: Essays on the Politics of Bodies, 1995).

In one passage, Grosz is talking about scientific theories. She describes how Einsteinian gravity replaced Newtownian gravity, as if they were just so many Kuhnian paradigms. And I thought (earlier in the year as I was reading it), that's not right. One didn't replace the other, that's not how we think about it. We don't study Newton as a historical curiosity. (And I was already constructing myself as part of the 'we', unconsciously, no Lizzie, you're not one of us, you don't understand).

Then I thought more about it and wondered if I was wrong. That there was some fundamental incompatibility between the two, rather than perhaps a slightly uneasy sliding of frames of reference sometimes. I always thought it was just that you used the equations or the approach that suited the problem at hand, you didn't just declare Newton was WRONG and get all quantummy about it. And, by implication in Grosz's book, science was also wrong, as we just couldn't get anything right the first time.

OK, so this is a caricature of Grosz' description; but the main thing that struck me, assuming the understanding I had of these things since a kid wasn't itself totally off the mark, was that she just didn't get how it worked.  Maybe you don't question it at school, but if you grow up in the sciences, then there are ways of approaching things that you don't even know you have until something calls it into question. From this I conclude that it can be really hard to understand science if you have not already been steeped in it.

Lordy. I think I will open that bottle of red after all.