I do love a bit of space craft. These delights have popped up on my radar over the last couple of days as I have been confined to bed, the result of some pre-winter disease, and with my brain unable to process anything work-related (until this morning), there has been quite a bit of mindless internet roaming and DVD watching going on. (And more toast and Nutella than a person really needs). 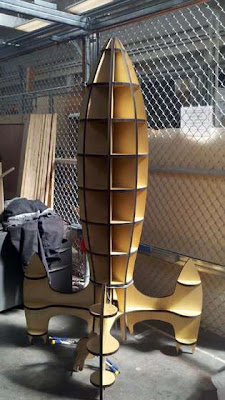 This beautiful rocket bookcase was made by Jesse Harrington, who is, according to their profile, a 31-year old robot. If you're lusting after this as much as I am, you can find instructions about how to make it at Instructables.  I fear it is a bit beyond my skills.

This, however, is more like it. Over at Doodlecraft, Nat has made a wonderful rocket-powered jet pack out of two plastic drink bottles, coloured felt, silver paint, tape, cardboard and hot glue. This would gladden any space nut's heart. 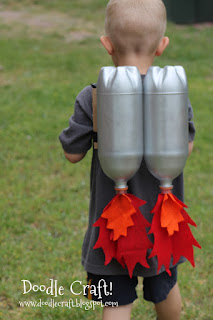 If you want to have a go at making this costume, full details can be found here.

This one is hardcore: Sputnik in a biscuit tin.


In 2007, the BBC News Magazine issued a challenge to create the equivalent of a Sputnik satellite using just stuff from about the house:

There are transmitters in mobile or cordless phones, wireless internet routers and baby monitors, and you may well have a thermometer in the medicine cabinet.

A party balloon can act as a simple pressure switch of sorts - a partially inflated one would certainly expand and burst if the pressure outside dropped to zero. And temperature switches can be found all over the house, including in the thermostat for the central heating system, or in the electric oven or washing machine.

Electronic gadgets contain batteries, and fans can be found in home computers or the kitchen extractor. The only thing you may have trouble laying your hands on is a large metal sphere with whiplash aerials poking out.

This is where your biscuit tin comes in. No whiplash aerials, but it makes a spiffy housing for all the components. As Paul Rubens, the author of this article, said, it really is incredible that technology which barely existed 50 years ago is now part of every household (well at least in some parts of the world).

And finally, you wouldn't know you were chez Dr Space Junk unless there was a splendid rocket cake.  This one is truly ....  something else. 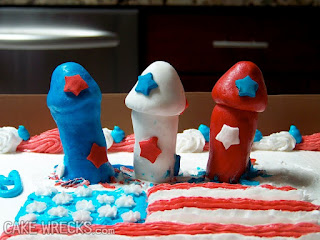 Apparently, they are meant to be rockets. Of some kind. This cake was made for a Fourth of July celebration in the USA and comes to Space Age Archaeology courtesy of the marvellous Jen and her team over at Cake Wrecks (When professional cakes go horribly, hilariously wrong). Freud could go to town on this one.

Well, now it's time for me to venture out of bed and persuade myself that fruit is a better option for a sick person than more toast with lashings of butter and Nutella. Wish me luck.