Performing the Moon: Tranquility Base and témoignage

Sometimes simple thoughts can take a long while to catalyse.

Last year, Dr Jonathan Bollen, Head of Drama at Flinders, did a joint seminar with me based around the ideas in Michael Shanks and Mike Pearson's Theatre/Archaeology (2001). Among other things, I remember talking about the spectacle of the rocket launch and the fact that a rocket is actually a very ephemeral entity, only being assembled prior to the launch, and disintegrating during it as the various stages separate. All of this is watched by people in control rooms, tracking stations, and at the launch site, as you see in the photo below.

On Tuesday this week I gave a guest lecture to a Screen & Media class about Indigenous media. For this, I looked at how Aboriginal groups in Canada and Australia had used satellite television creatively to support their cultures. As historical background, I mentioned the concomitant growth of global television with the use of the geostationary orbit, as exemplified by the estimated 600 million people who watched the Apollo moon landing in 1969.

And today, I'm having a 'mini writing retreat', locked away in a bare seminar room with one of my students. I'm reading a PhD thesis by Fiona Campbell and Jonna Ulin called Borderline Archaeology. A practice of contemporary archaeology - exploring aspects of creative narratives and performative cultural production (Gothenburg Archaeological Thesis No 29, Goteborg, Sweden, 2004).

Two quotes discussed in their book really spoke to me. In 1899, Canadian historian William F. Ganong made a remarkably prescient statement about how archaeology should be done:

Unlike some other phases of history, archaeological studies .... should be undertaken as soon as possible after the events have occurred, for their evidence is found not so much in documents reasonably sure of long preservation, but in perishable materials and alterable localities.

Spot on, I thought. There is no necessity to wait around for the place or the junk to acquire some archaeological credibility - we should be leaping right in after the last participant has left the site and collecting their garbage! This kind of thing was the topic of conversation on the CONTEMP-HIST-ARCH email discussion list after the wedding of Prince William and Kate Middleton. A few people thought this was a lost opportunity to do some really creative contemporary archaeology on the streets where swarming crowds of people gathered to watch and celebrate, precisely the kind of thing that we ought to be all over .... but alas, contemporary archaeologists were glued to the telly with the rest of the world ....

Campbell and Ulin's referencing is a little patchy, so I'm not precisely sure where the next quote came from.  They say

I was thinking of Tranquility Base while reading all of this, particularly as Beth Laura O'Leary and I have recently finished writing a piece where we talk about the archaeological value of Tranquility Base as a site. I thought to myself: the entire Apollo moon landing was a performance by this definition, being organised to the most minute level, and witnessed by the largest audience in human history. And in fact, looked at from this perspective, the structure of the site is dictated as much by the requirements of the performance as the actual scientific work that was to be carried out there. Or perhaps it is truer to say that the actual scientific work cannot be separated from the performance of being the first humans on another planet.

There's also, I think, a fine dividing line between being witnessed, and being surveilled. The astronauts' bodies were being constantly monitored, as were their every action and word; they had a tight script for all actions they undertook and what they said was of the utmost importance.  The stage and the prison of their suits and lander were one and the same. 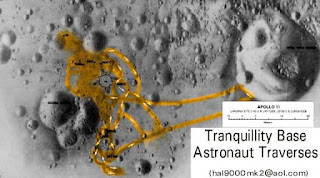 This perspective makes me see a new dimension to how one might analyse the actual traces left at Tranquility Base, the bootprints, tracks, furrows, pits, discarded materials. I would always have argued that this was an archaeological site like any other, that can be mapped and analysed (well, if one could do this remotely), but exactly what we could learn from this, I wasn't entirely clear. One obvious thing is the difference between what the astronauts actually did and what they said they did, but I don't know why we want to know that ... and of course there are no similar sites to compare. Maybe this is partially the problem.

But hang on. We do have similar sites, just on terrestrial landscapes. We do have places where humans landed in hostile, unknown environments and carried out a series of actions, frequently with some scientific objective (eg Cook and Banks, that French bloke in Tasmania), and sometimes watched by Indigenous and other inhabitants. Would it be interesting to compare the use of space in such places? Did the strangeness of the environment make people move carefully and always within view of each other, for example?


But to get back to my main point, if I think of Tranquility Base as a performance dictated by the needs of the witnesses, then the trails left by the astronauts tell us something about the expectations of those witnesses, scientific, political and public, rather perhaps than the agency of the astronauts themselves. In this sense, can we compare their movements to those of robotic missions on Mars? Are there any similarities or differences between human and robotic engagements with planetary landscapes and is there anything interesting to be learnt from this comparison?

Beth O'Leary makes the point that at Tranquility Base we have a well preserved site which can be viewed remotely, together with the documents of the mission AND the film footage. This is a rare opportunity, then, to study the site as a performance: to compare the experience of different witnesses who have access to different versions (the astronauts see each other, the public see it on television, the tracking station and NASA staff see the raw data, the journalists edit and re-represent it), taking as one of those versions the site as it becomes after the astronauts leave: a flat, two-dimensional record of a multi-dimensional event which took place over many hours, a lasting trace of ephemeral movements and intentions.

Well, we're only fifty years or so late to realise the archaeological potential of Tranquility Base, but we're working on it.  The next time people go to another planet, perhaps we should mobilise a bit earlier ......


References
Ganong, William F. 1899. A Monograph of Historic Sites in the Province of New Brunswick. Proceeding and Transactions of the Royal Society of Canada 2.