Space travel and culture: from Apollo to space tourism 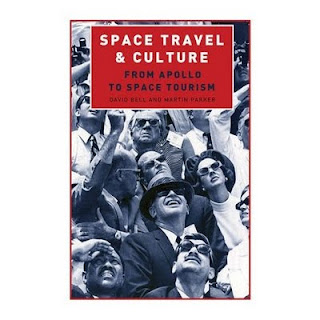 Apparently this is out (but still waiting for my copy, alas).

I've been a bit quiet on this front lately, but the prompting of space geographer Fraser MacDonald, and the aerial Brett Holman's recent visit to the UK National Space Centre (Leicester) led me to add two more objects:  the sounding rocket WAC Corporal (the subject of Fraser's research) and the lovely Blue Streak, of course.  They join the V2 as the only rockets so far on the Space Heritage List.

Other rockets I should include are the Agena - plenty of them still in orbit, and no doubt on the ground, and in museums, Saturn V, Redstone, the R7 Semiorka, and Veronique and the Pierres Precieuses (still think that is a great name for a band).  I tend to neglect rockets as I find them slightly less fascinating than satellites.  It's also slightly harder to find out if there are extant examples, and then there is the question of their actual existence to begin with (see my earlier post on the identity of rockets).

The orbit around Earth is a very messy place and the Pentagon’s far-out research arm wants to do something about it. The Defence Advanced Research Projects Agency put out a notice last week requesting information on possible solutions to the infamous space debris problem.

“Since the advent of the space-age over five decades ago, more than thirty-five thousand man-made objects have been cataloged by the U.S. Space Surveillance Network,” the agency notes. “Nearly twenty-thousand of those objects remain in orbit today, ninety-four percent of which are non-functioning orbital debris.”

These figures do not even include the objects too small to count. Hundreds of thousands of these smaller objects are estimated to exist, and as debris hits other debris, it creates even more small pieces, exponentially increasing the objects that could threaten satellites and spacecraft.

Space debris has long been a concern as the number of satellites in orbit has increased over the years. But the issue was again highlighted in 2007, when a Chinese anti-satellite missile test created a massive debris field of some 40,000 pieces. The next year, the U.S. conducted its own shoot down of an errant satellite, creating yet another field of debris. The concern is that these pieces of debris could strike satellites, or a manned spacecraft, like the International Space Station.

It doesn’t take much to cause a catastrophe; even something as small as a paint chip could prove potentially disastrous if it struck the space shuttle. Darpa is looking for “solutions that could effectively remove significant amounts of debris in a cost-effective fashion.” No doubt, there will be a good mix of creative, unusual and bizarre suggestions. 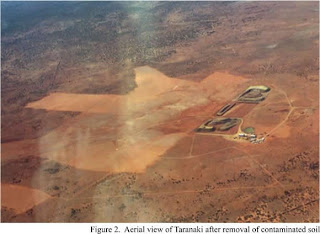 Or will go, to be more precise. I'm so excited I can hardly contain myself. At the end of September I will be accompanying my nuclear heritage colleague Mick Broderick on a road trip to Maralinga and Emu Field. Must polish up the steel caps and prepare other field gear!

NASA is preparing contingency plans in case a large piece of orbital debris is deemed a threat to the International Space Station. The chunk of space junk measures about 19 square meters, large enough to do significant harm to the ISS in the event of a collision. As a precaution, NASA mission controllers are preparing a plan that would see the ISS fire its booster rockets in order to escape the path of the debris, which is circling the earth in an elliptical orbit.

NASA currently estimates that the space junk will come within 3 kilometers of the ISS on Friday morning. The agency did not state the origin of the debris, but the Earth is encircled by countless particles of refuse from spent satellites, industrial waste, dust, and other sources. The ISS is equipped with shielding that offers some protection from space junk.

On Tuesday I flew to Canberra for the announcement of the 2009-2010 ACT Heritage Grants. And yes - I got one, to do background research and a geophysical survey of the Orroral Valley tracking station, in collaboration with my elegant geophysicist friend I. Moffat. Everyone was very enthusiastic about the project, which was lovely.

So now I really have to think about the rationale of contemporary archaeology (which is the subject of a recent debate on the Contemp-Hist-Arch list too). What, exactly, can I use archaeological methods to find out that documents/oral histories can't? A simple enough question, but surprisingly difficult to answer .....