A picture of the Apollo 17 astronauts in 1972 got me thinking about shadows on the moon as part of the archaeology of the six human landing sites.


The peculiar character of light on the Moon of course forms part of the corpus of conspiracy theories claiming the lunar landings were faked. It's argued that the shadows seen in photographs and film footage are caused by the lighting in the studio where actors lumbered about pretending to be in low gravity, rather than the Sun. Or something like that. To be honest, I don't spend a lot of time thinking about the conspiracy theories.
(But I will offer this gem from the sublime Mitchell and Webb).

Shadows on the Moon are, however, of great interest from a completely different perspective. Years ago, I was in the library at the Defence Science and Technology Organisation headquarters here in Adelaide, and found a book that has stuck in my memory. It was a study written for US Congress, in the 1980s, on warfare in space. The chapter on the Moon was all about how lunar conditions would affect hand-to-hand combat. The author, a military expert, noted that many of the properties of lunar light would make a sort of shoot-out situation particularly interesting. For example, if you hid from someone in a shadow on Earth, you would still be visible. Light diffuses through our heavy atmosphere and shadows can be all sorts of colours (vide Goethe: 'colour itself is a degree of darkness').
On the Moon, shadows are as black as Hades. Although reflection from the lunar surface will still illuminate objects in shadow, if you go deep enough into one, for example, under a boulder overhang or in a crater, you can be invisible to observation.
You're also cold. The temperature in shadow drops markedly.
In a battle with human protagonists, terrestrial instincts may lead you far astray.
But let's move on from this gloomy topic and get back to the archaeology.
One thing the astronauts from the Apollo missions brought to the Moon was new shadows, shadows that were cast by machines and bodies and flags and rovers, in an interplay of movement and stillness. The speed of the shadows differed depending on the activity being carried out. Some were solid black and some were textured. They crossed and uncrossed with the angle of the sun and the movement of the astronauts around the tiny landscapes that constituted their lunar experience.

The shadows were captured and frozen in many, many photographs of all Apollo missions; in these photographs, they became a different type of artefact. I would be curious to know if anyone (apart from conspiracy theorists) has analysed the shadows in these images.

And then some shadows left, never to return, and other shadows stayed to be swallowed by the lunar night and to emerge into day again. The shadows of the flags, descent modules, rovers, cameras, and other equipment are now cast over the lunar regolith until something causes the object to decay in tens, hundreds or thousands of years. The objects left behind don't move, but their shadows circle them in diurnal devotion, sundials without a mission.

The shadows may, however, be of more than passing interest in considering the taphonomy of lunar sites.  There's some evidence to suggest that dust levitates as the terminator passes over, due to changing electrical potentials. There may be small-scale surface dust movement as shadow boundaries change, creating sub-millimetre electrical fields that cause dust particles to accelerate and collide with each other (NASA 2011). So the dust environment of the objects left on the Moon may be not static, and we don't know what the long-term impacts on material degradation are.
Now, the Lunar Reconnaissance Orbiter uses the shadows to detect the presence of these orphaned items of material culture.
There's only one way to finish this post: with a quote from Cat Stevens' classic hit Moonshadow:
Did it take long to find me? I asked the faithful light.
Did it take long to find me? And are you gonna stay the night?


References
NASA 2011 NASA’s Recommendations to Space-Faring Entities: How to Protect and Preserve the Historic and Scientific Value of US Government Artefacts. Human Exploration and Operat6ions Mission Directorate, Strategic Analysis and Integration Division, NASA

In the mind's eye: the topology of Interstellar

So, I finally saw Christopher Nolan's film Interstellar (2014), after carefully avoiding all possible spoilers for weeks.

So much to say and think. I haven't looked up any reviews or commentaries yet, wanting to write about what really struck me without clouding my thoughts.

The first thing, soon said, is ROBOTS! Coolest. Robots. Ever. I hope they were based on real proposals for robot architecture because I want those robots.

The second thing is the representation of multidimensional space. The moment I realised the behind-the-bookcase space was five dimensions was revelatory. Amazing how they did that, how they made a 2D representation of 5D. Really fuckin' impressed, excuse my French.

As I was starting to understand how they put it together, two books I have been profoundly influenced by sprang to mind, followed by a third. 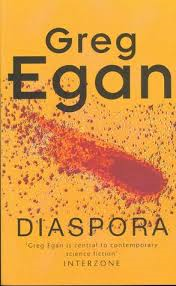 One was Greg Egan's wonderful novel Diaspora (1997), which is all about different kinds of non-Euclidean space. Egan has an extraordinary ability, through words alone, to make you almost see and feel higher dimensional spaces. My copy is hiding in the bookcases somewhere or I would at this point be quoting large chunks to demonstrate the sheer brilliance of it.

Much later, I was writing a paper about how gravity structures the archaeological record in Earth and space and the necessity of coming to grips with non-Euclidean space (The Gravity of Archaeology, which you can find here). I had to read a lot of topology, and in my quest for understanding I came across another extraordinary book: J.R. Weeks' The Shape of Space: How to visualise surfaces and three-dimensional manifolds (1985). Unlike Egan, he could legitimately use lots of diagrams (I have a feeling that diagrams might be a bit of a mood-killer in a novel), but again he was trying to show you how to visualise higher dimensional and non-Euclidean spaces in two or three dimensions.

It's a freaky feeling when you realise you have just visualised something in seven dimensions.

Our brains, however, are not really made for such stuff. For me, at least, the experience of reading Egan and Weeks is feeling these dimensions just on the edges of vision; you can almost see them, and your brain can almost comprehend them, before a sort of vertigo sets in and the glimpse is lost. It's really hard to hold onto the moments of clarity when your flesher body lets go of its verticality and physical extension to split itself across a manifold.

Of course no discussion of other-dimensional realities would be complete without a nod to Flatland: A Romance in Many Dimensions (Edwin Abbott, 1884) - topology PLUS social satire!

Oh and the final one: Madeleine l'Engle's A Wrinkle in Time - remember the tesseract?

I'm giddy now with all this brainwork and must go and lie down for a while.

Posted by Dr Space Junk at 9:49 pm No comments: Links to this post
Email ThisBlogThis!Share to TwitterShare to FacebookShare to Pinterest
Labels: Cinema and space, Space and popular culture

Space Archaeology: The Next Decade.

This is the abstract for the paper I gave at the annual Australian Archaeological Association conference last week in Cairns.

Space archaeology: the next decade. 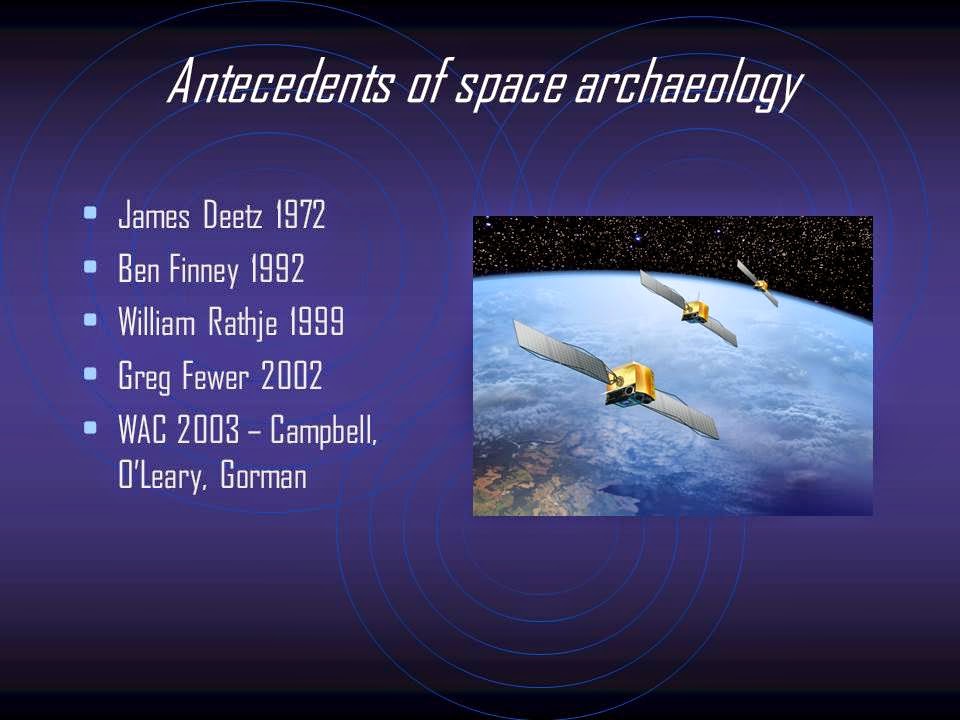 When space archaeology emerged in 2003, it divided opinions. Ten years on, space archaeology is now represented in encyclopaedias and handbooks, and an impressive body of work has accumulated. NASA has produced guidelines for managing lunar heritage and there are plans to register the Apollo 11 Tranquility Base site as a national or world heritage site. Some, such as Michael Schiffer, have contextualised space archaeology within an ‘archaeology of science’, while others situate it within ‘the archaeology of the contemporary past’. In this paper I review how the directions and ideas that emerged from the first conference session at the World Archaeological Congress have developed. Despite critiques of these approaches, nationalist agendas and ‘Space Race’ narratives are still a large part of how space archaeology is framed. There is a dearth of fieldwork and analysis of material remains from terrestrial space sites, which is partially a result of few active practitioners, and security issues around military sites. Moreover, the technical knowledge needed to understand and investigate the machinery of space exploration is not a standard part of an archaeological education. Given the constraints, what are the most realistic directions for future research in this subfield? I sketch a decadal plan for space archaeology and heritage management. 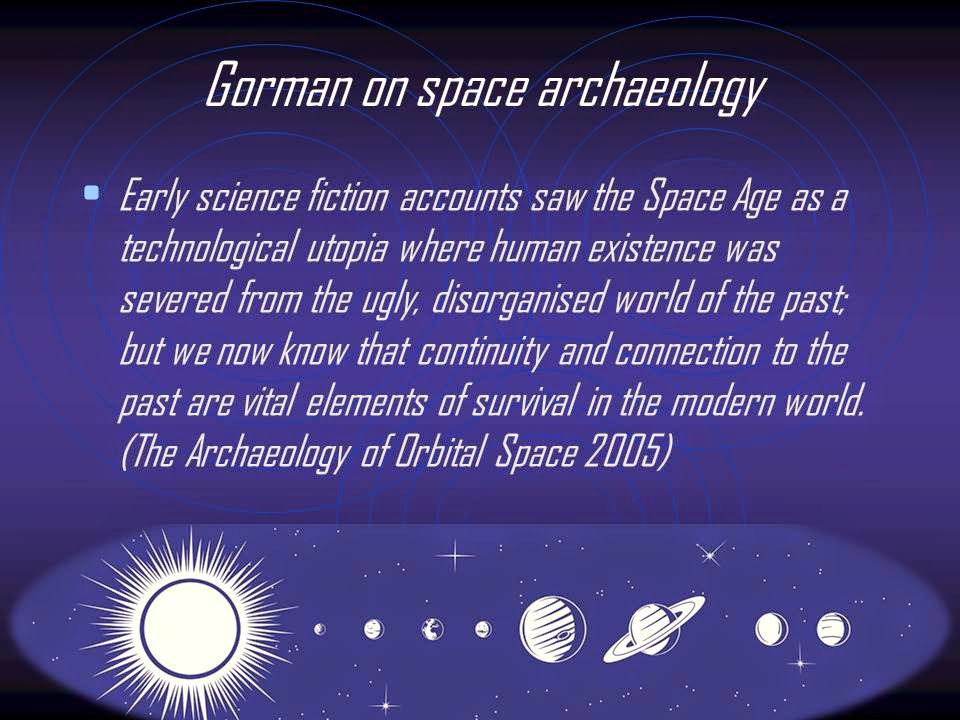