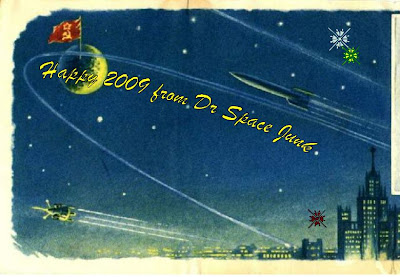 Posted by Dr Space Junk at 8:48 am No comments: Links to this post
Email ThisBlogThis!Share to TwitterShare to FacebookShare to Pinterest
Labels: Dr Space Junk

The heritage value of comets

In the short story Of late I dreamt of Venus by James van Pelt (The Mammoth Book of Best New SF 21, 2008, edited by Gardner Dozois, pp 84-99), various comets are manoeuvred into orbit around Venus, to provide water for terraforming. However, there is opposition:

There's a lobby defending Halley's Comet for its 'historical and traditional values', as well as several groups who argue that 'comets possess a lasting mythic and aesthetic relation with the people of Earth'.

Tranquility Base under threat

Astrobotic Technology Inc., one of the leading teams in the $20 million Google Lunar X-Prize (GLXP) has unveiled its plans for a series of robotic expeditions to build a commercial library of information on lunar science and engineering.

“Astrobotic will robotically explore the Moon’s high-interest areas on a commercial basis, collecting information required to design future outposts and to answer scientific questions about the Moon and Earth,” said President David Gump. “Our data library also will point the way to utilizing lunar energy and mineral resources to lower the cost of exploration and eventually supply markets on Earth.”

Astrobotic’s first lunar expedition is the "Tranquility Trek Mission" in May 2010 to the historic Apollo 11 landing site. The second and third missions are aimed for crater rims at the poles because NASA and other agencies plan to establish permanent outposts there. The lunar poles offer persistent sunlight for electrical power and moderate temperatures, plus potential water ice in permanently shadowed deep craters. The company expects that by 2013 it will send a robot into one of the deep polar craters to confirm if water ice can be mined to support future crews and refuel future spacecraft.

Additional missions will collect seismic data to chart the Moon’s interior, and a prototype Moondozer will test lunar construction technology.

Astrobotic Technology was formed in late 2007 and has secured lunar contracts from NASA and two commercial firms. Prototype rovers are now being field-tested at Carnegie Mellon University by Dr. William “Red” Whittaker, the firm’s Chairman. Prototype landing platforms have been constructed by Raytheon Co., using the company’s proven digital terrain matching technologies to achieve precision landings on the Moon. Mission planning and camera expertise is provided by the Lunar and Planetary Laboratory at The University of Arizona. More information is available at www.astrobotictechnology.com