My erudite archaeoastronomical colleague Alun Salt sent me this article on a bunch of space enthusiasts in Uganda who are building a space shuttle in their backyard: African space research: Dreaming of a manned shuttle.

There's lots to love about this: the general craziness of Uganda (some young thing on the television the other day had never heard of Idi Amin), the sheer guts and determination of the volunteers and their leader Chris Nsamba, the openly nationalist agenda, the jackfruit tree in the backyard, and the almost-tenderness of the journalist, Anne Cavell, towards these dreamers.

I've long been interested in Africa's role in space. Nigeria, for example, had one of the very earliest generations of USA tracking station (a Microlock system, I think); in Mozambique, a crazy Portuguese dude built his own tracking station back in the 1950s. A few years ago I had one of my students do a project on Nigeria's space heritage, to explore the kinds of values that might be appropriate for space places outside of the Cold War western industrial complexes. I love the ambition of Uganda's attempts to participate in space, and why shouldn't they be ambitious? The big spacefaring states have had it all their way for too long.

And of course this fits very nicely into one of the often-overlooked themes of space travel, the role of amateurs and enthusiasts.  The historical importance of rocket societies in the earlier part of the 20th century, and their contribution to space exploration as we know it today, has been well-researched; but people tend to forget that amateurs and the public continue to be involved in making their own kinds of space.  My favourite example of this is Australis Oscar V, the satellite designed and built by Melbourne University students in the 1960s, and still in orbit.

Maybe Uganda won't have their own space shuttle or astronauts in the next decade, but I don't think that's the point. It's what they'll learn and accomplish along the way that makes this a significant project to watch.

Space junk and its affinity for water: Columbia's fuel tank 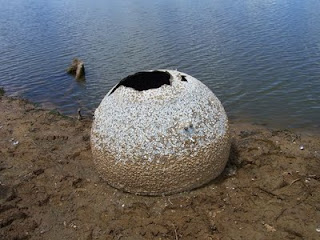 One of 18 fuel tanks that flew aboard the U.S. space shuttle Columbia, which broke apart as it re-entered the atmosphere for landing on Feb. 1, 2003, has been found in a lake in drought-stricken Texas. "This is one of the bigger pieces," says NASA's Lisa Malone, head of public affairs at the Kennedy Space Center in Florida, where the Columbia debris is stored.

The space center got a call late last week from police officers in Texas who were asking for help identifying a large spherical tank newly exposed in the receding water of Lake Nacogdoches. It was a match to gas tanks on a pallet in Columbia, enabling its seven member crew, which included Israel's Ilan Ramon, to stay in space conducting research for 16 days. As Columbia flew through the atmosphere for landing, its left wing, which had been damaged by a debris strike during launch, broke off, triggering the ship's destruction over East Texas and Louisiana and killing the crew.

Malone said NASA will retrieve the tank and add it to the rest of the recovered wreckage, which is stored inside the shuttle's Vehicle Assembly Building.  Unlike the Challenger debris, which was buried in an abandoned missile silo at the nearby Cape Canaveral Air Force Station, NASA wanted to make pieces recovered from Columbia available to researchers, in the hopes that more can be learned to benefit future space travelers.

The bizarre world of philately and space exploration

You don't have to hang around the space world for long to realise that there is a strange space-stamp connection going on. Stamps, first day covers, rocket mail, stamp-funded space research programmes, it's all there. My erudite Highland friend Fraser MacDonald is into it too, specialising in space stamps from 1933 to 1937 or something equally obscure.  Often when I'm looking for pictures of particular spacecraft, the only ones I can find are those on stamps.

And OK, I'm not entirely immune from this obsession myself - one of my most prized possessions is a large framed montage of space stamps in the shape of a rocket, made for me by one of my former students.

Apollo 15 astronaut Al Worden this week released his autobiography, Falling to Earth. He and his fellow astronauts in this mission were given the boot by NASA because they made a secret deal with a German stamp collector to sell 100 of the 400 hundred first day covers they smuggled aboard (they were going to use the proceeds to set up trust funds for their children). It was not the first time that astronauts had taken such things into space, but for some reason NASA decided not to let them get away with it on this occasion.

The other interesting aspect of this is the special status accorded to objects that have been flown in space, whether they are human bodies, spacecraft debris, or souvenirs. Something that has been in space acquires a value that its unflown counterparts can never partake of. I'm quite interested in why this should be - I mean it's perfectly comprehensible at an instinctual level, but I think it takes the idea of the souvenir much further into the realms of fetish and talisman. First day covers are of course very light; and verifiable too, as they are linked to date, so perhaps this one reason why they (and coins) seem to feature frequently in this sort of collecting endeavour.

Just to illustrate, here's a lovely Europa first day cover, commemorating one of the the launches of the British-French-German rocket from Woomera in South Australia in 1966:

Fraser has written a fascinating piece about rocket mail in Brisbane in the 1930s, which you can read here.