A rocket cake to be proud of! 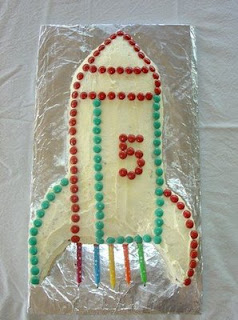 This gorgeous rocket cake was made by my friend Kaylene for her son Reid's fifth birthday. I am sure it tasted as wonderful as it looks.

Posted by Dr Space Junk at 10:29 am No comments: Links to this post
Email ThisBlogThis!Share to TwitterShare to FacebookShare to Pinterest
Labels: rockets, Space and popular culture, Space food

There's nothing more satisfying for a space archaeologist than to look at some piece of space hardware and be able to identify it immediately .... In this case it was particularly easy.

Rocket wreckage found in outback
Surveyors in the Simpson Desert have discovered what is believed to be part of a Blue Streak rocket launched at Woomera in 1966.

Simon Fanning and his geological survey team were flying over the Simpson Desert when they saw what they believed was part of satellite in the scrub.

"It turns out this wreck is not in fact a satellite but a rocket - at least a chunk of one anyway" he said.

"I'd seen ET as a kid, Star Wars and all that stuff, but to actually find something was really different."

Dr Alice Gorman of Flinders University in Adelaide believes the rocket could be one of 10 blue streak rockets launched at Woomera in South Australia in the 1960s by the European Launcher Development Organisation.

"The Blue Streak's very distinctive and the location in the Simpson Desert and the details on the rocket indicate it's most likely from one of the two 1966 launches" she said.

Mr Fanning is reluctant to disclose the precise location of the find, but the ABC has found a EBay site offering the GPS coordinates for sale.

There is private collector interest in Blue Streaks, but Dr Gorman says this discovery belongs in a museum.

"There was only a handful of them launched here in Australia" she said.

"I think it would be appropriate to put this one in a museum."